My modular building project continues on from part 2...

Nearly two months since the last update! Gosh. Now that the spring warmth has arrived, there is a lot to do in the garden. Combine that with numerous other small jobs and building a new laundry, there hasn't been much time for blogging. I haven't been idle though, just nothing of much note has been happening. Then there was the entire week that I spent debugging and fixing the electronics after I sent 15VDC down the RS485 bus by mistake. Took out most of the ICs in the system with it. Sigh!

Anyway, late in August I gave the whole building a zap with black primer. 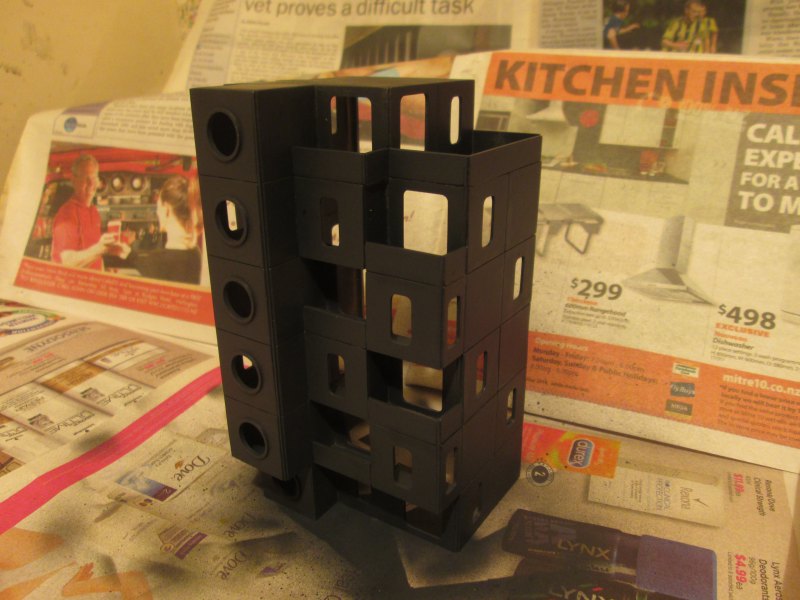 This helps stop any light leaking through from the inside. It looks pretty racy all black, however that isn't the look I was going for. So once that had dried I air brushed it successive coats of faded grey paint, going for that bleached concrete look.

Once I was happy with that I printed up some windows on clear transparency film and stuck them in place with Humbrol Clearfix, which works pretty well for gluing windows in place. 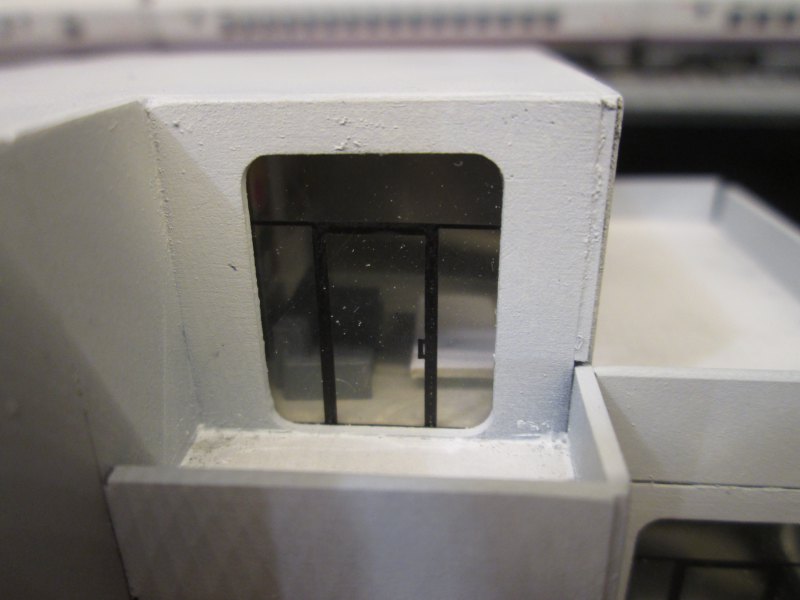 35 windows later and I was ready to build the interior.

Making the inside was pretty fun. I started by slicing up bits of styrene and foam core to build beds, sofas, and tables. Then I selected a bunch of bright-and-bold artwork and made up a sheet of thumbnail sized pictures. I printed this out on some glossy self adhesive paper on my $1 Brother colour inkjet with $5 off-brand cartridges... and the quality was outstanding! I had no idea my printer could do such a good job!

Then some floors were cut out to fit the inside of the building. The ceilings were painted dark, and the floors were carpeted with some very disgusting coloured paint. Walls were added and the entire assembly was hot glued together into a single core: 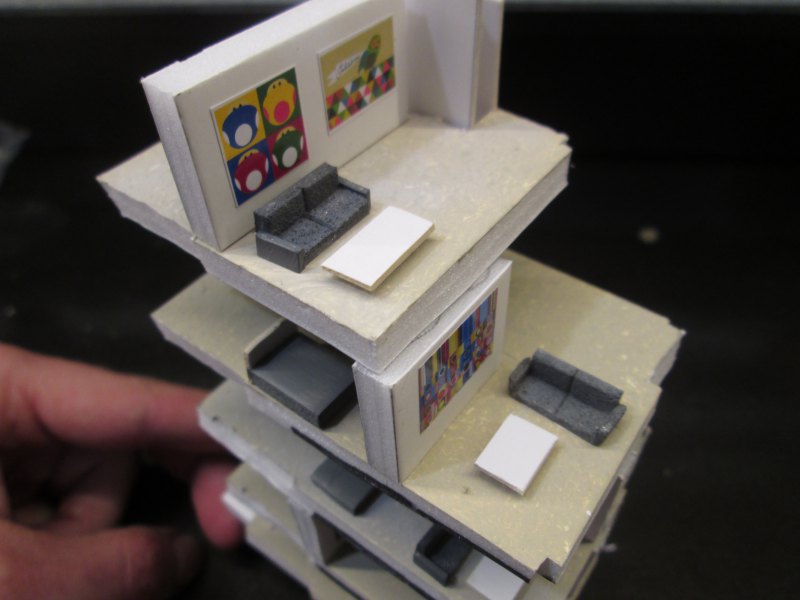 A strip of WS2812b LEDs runs up the rear of the building, glued into slots cut in the interior core. The LEDs are positioned to shine against the rear wall, which should provide nice washes of colour filling the rooms, rather than blinding beams of light coming out the windows. 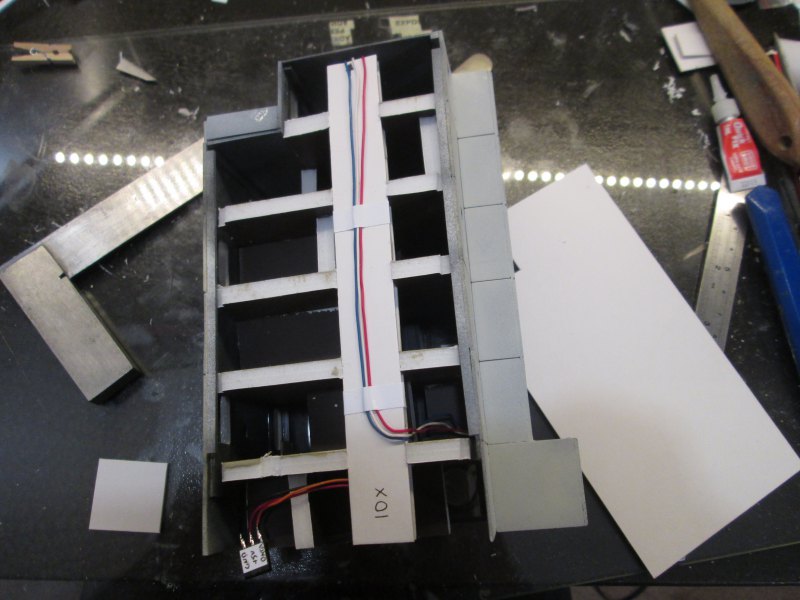 The WS2812b LEDs are quite neat. If you look closely below you can see the tony dark square that is the die of the integrated chip inside the LED itself. This takes digital signals and converts them into an intensity for each of the red, green, and blue emitters inside the LED. They come pre assembled on LED strip tape for $20/m, which gives you 60 LEDs to play with. 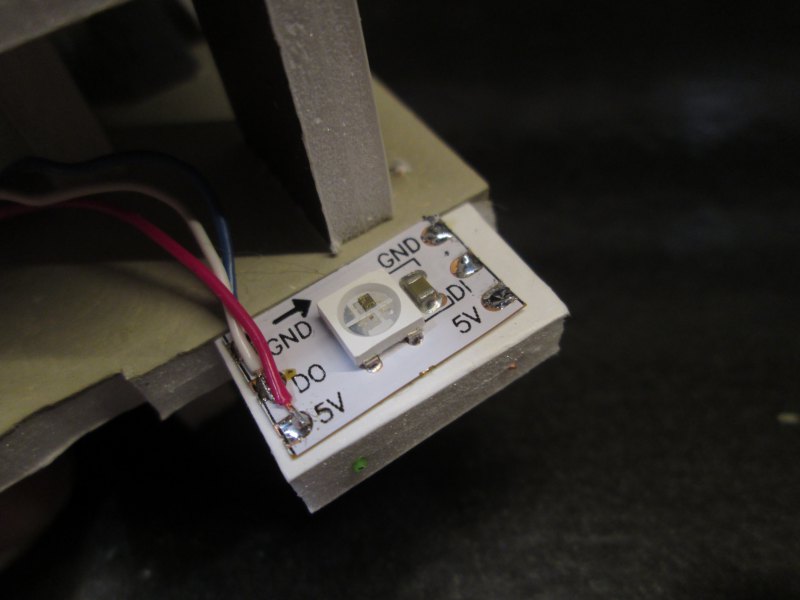 The great part is, that using an Arduino and three wires, each LED in the building can be adjusted to any brightness, and any colour. This makes it very easy to adjust the lighting to suit, and even vary it over the course of the day. So come evening I might have each room turn on its lights individually.

This all sits on my "UBUS", as in the Utrainia-bus, which connects each module together and carries power, data, and track signals. Then at the other end it plugs into my Master Control Box which then plugs into the ethernet backbone of our house. A collection of Python and Coffeescript daemons handle converting the UBUS signals between different formats, letting me use Merg CBUS, Art-Net, and native UBUS commands to address each module. 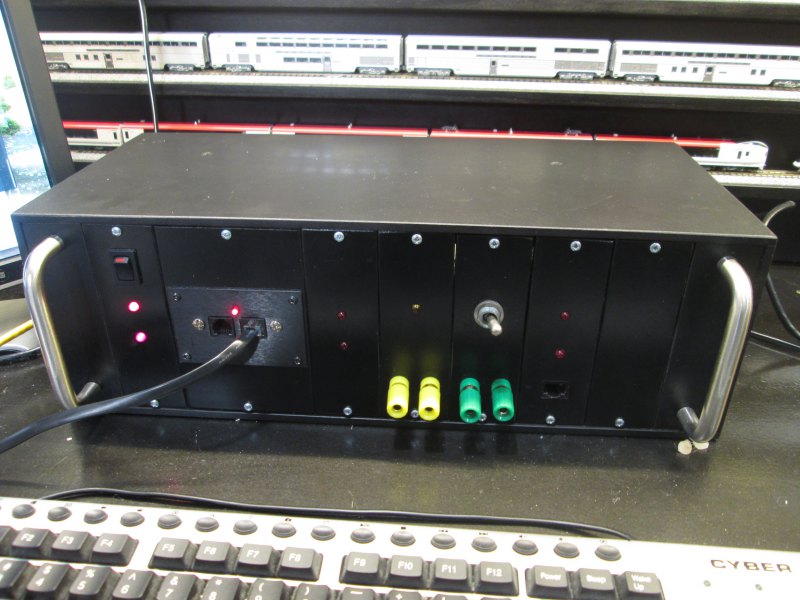 What this all means, in simple terms, is that I can take my iPad and adjust the colour and brightness of any light, in any building, on any module. This makes adjusting building lights very simple, or I can have street lights that slowly turn on their simulated sodium lamps slowly warm up. More on this in a future blog. 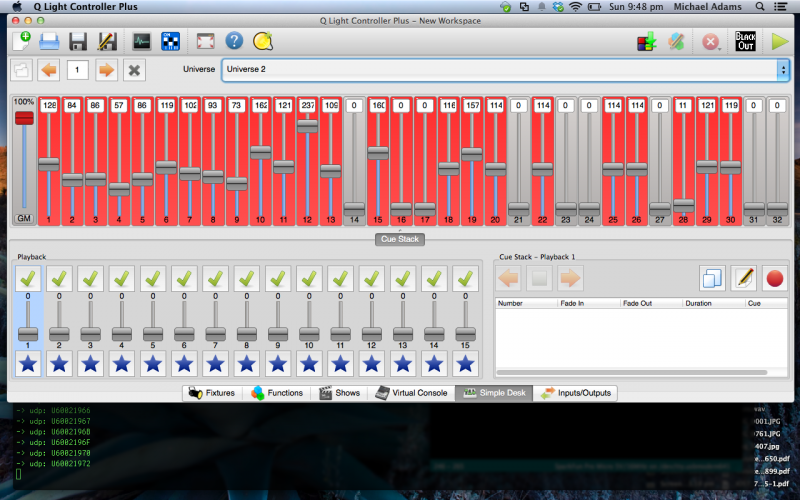 Putting it all together

Now that I have lights, a shell, an interior, and even furniture, it is time to put it all together. I cut out a backing piece from some 1mm cardboard and glued that on, then touched up some rough spots on the paint.

And here it is, roughly in position on Ranuska, demonstrating that every room can indeed be a different colour if I should so desire. 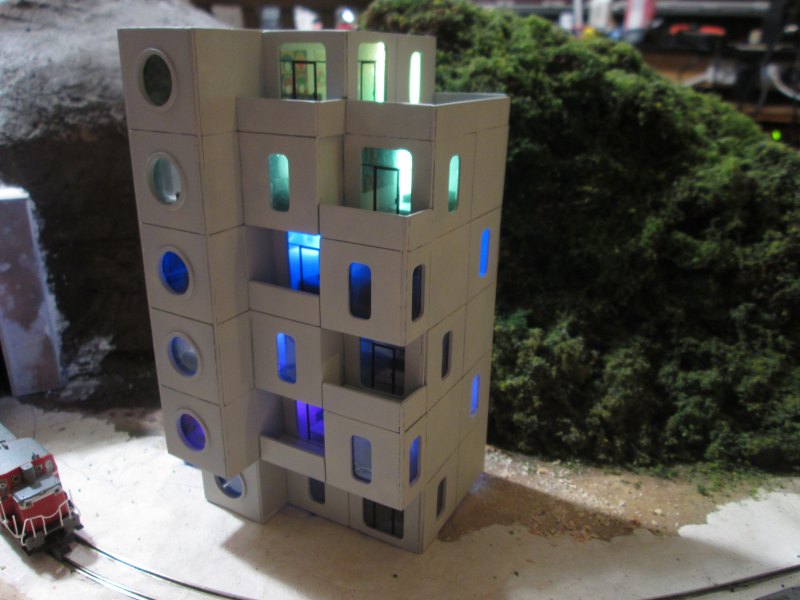 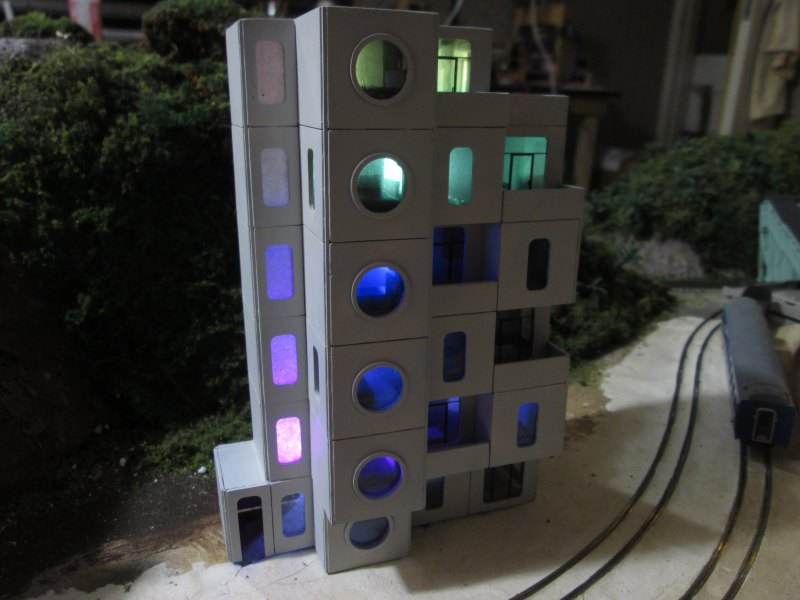 I also added a lift-well light for some extra interest.

Now that my modular building is mostly finished, attention has turned to the (in)sanatorium, which is slowly, but surely, progressing along. Its name however has been tweaked slightly to better convey the "warm" "fuzzy" feelings it is giving me...