This weekend was the biennial model railway show here in town, an eagerly awaited event by yours truly. As master of timekeeping I made sure we were down there right at opening time, lest the trade stands have some bargains that I missed out on!

First up, the trade stands. There were only 3 and a half stands there, and only a handful of N gauge stuff. I snapped up a few second hand British N scale wagons for $9 each. My first British N scale items in a long time, they seem well made and will look right at home in Utrainia. I was a little disappointed there weren't more trade stands, however I guess it is a pretty small show.

On to the railways.

No new layouts that I hadn't already seen, however it was nice to revisit some familiars with a closer eye. "Hexeter" presented a rather interesting scene, with a hexagonally shaped railway of 6 modules forming a circular snapshot of early British railway history. Segments of the scenery was good, but it is the locos that are the real star of the show. OO scale, they are all hand made from brass, card, styrene, etc. They run well, and are all very colourful and different. 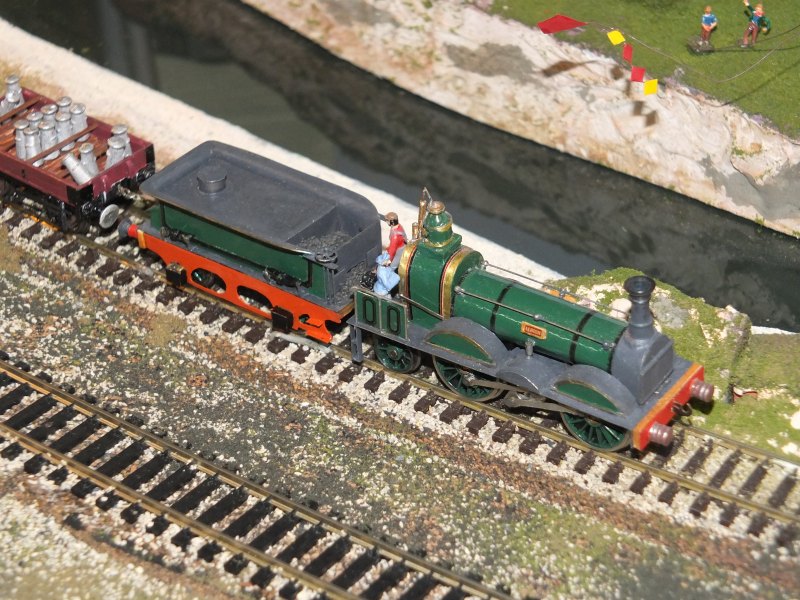 This one is driven by an oscillating pivot between the wheels and some kind of piston arrangement. Unfortunately I don't have more details, and it's hard to know what to search for. 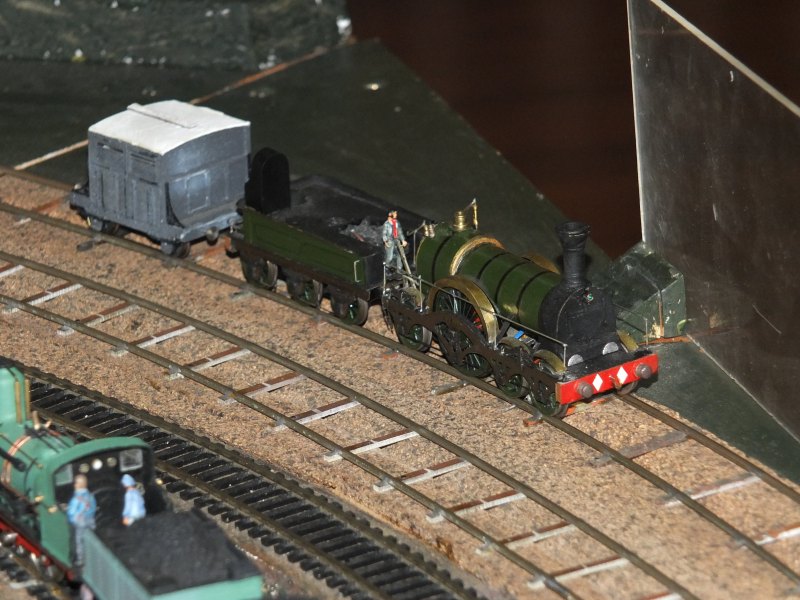 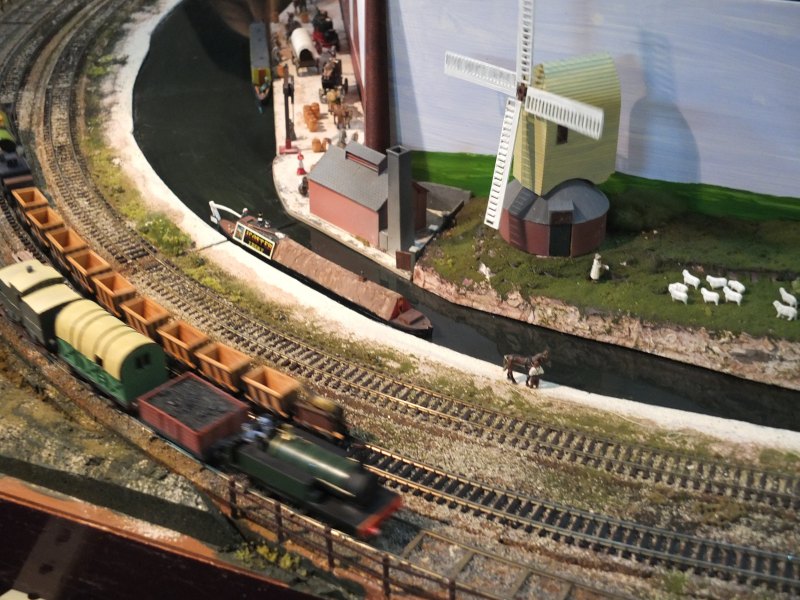 Two locomotives pass. Note the horse (for shunting) sitting in its own wagon at the back of the train! 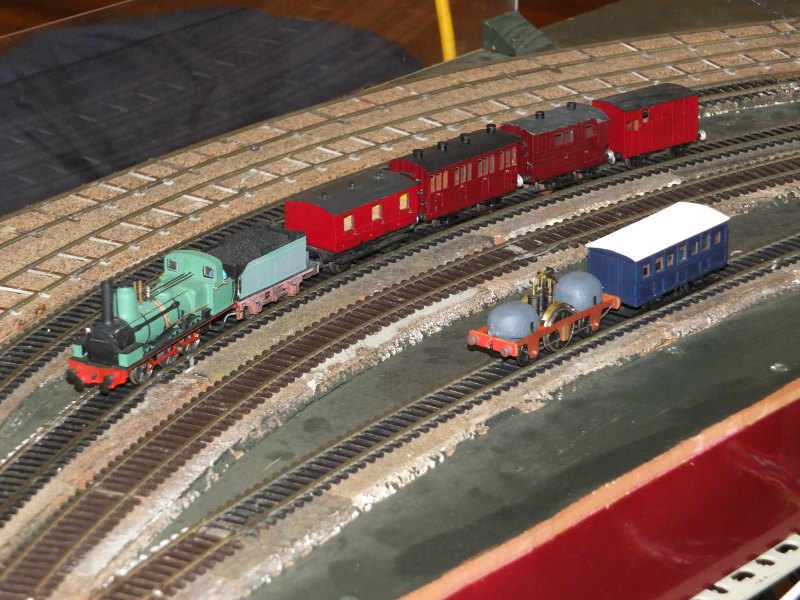 The railway features a selection of well made canal boats too. A very unconventional railway, the trains just went round in circles with no destination or purpose. However it is also the only time I've ever seen such early locomotives modelled, and modelled extremely well. Also unusual to see broad gauge track.

Next that caught my eye was "Arun Valley", a selection of small OO modules, again British. These small modules nicely represent a slice of England, this time during WWII. 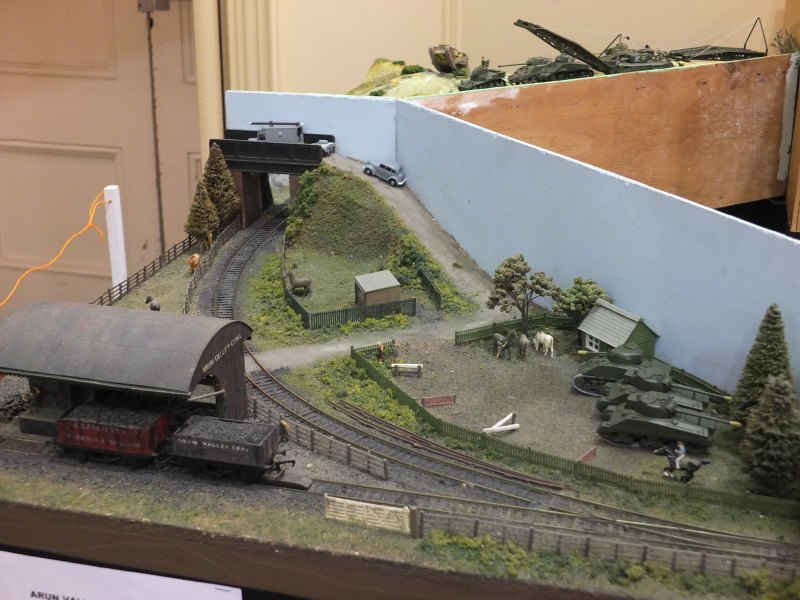 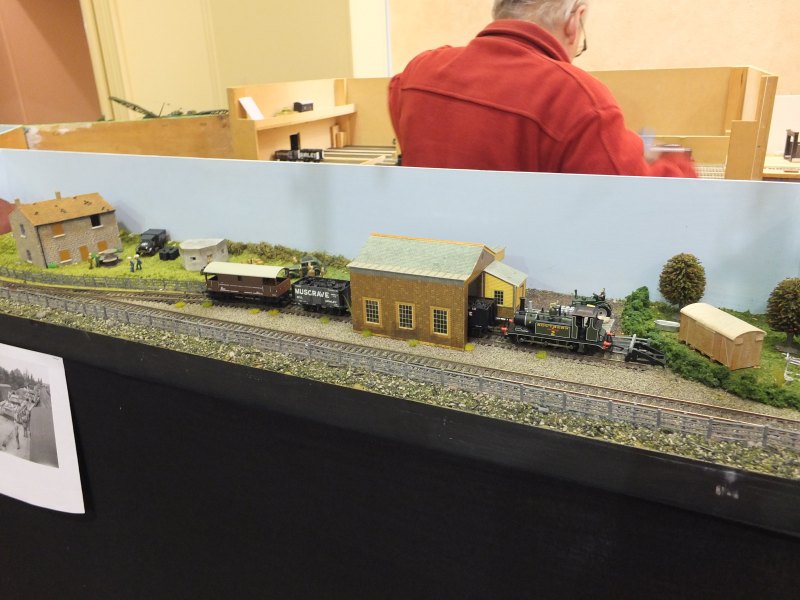 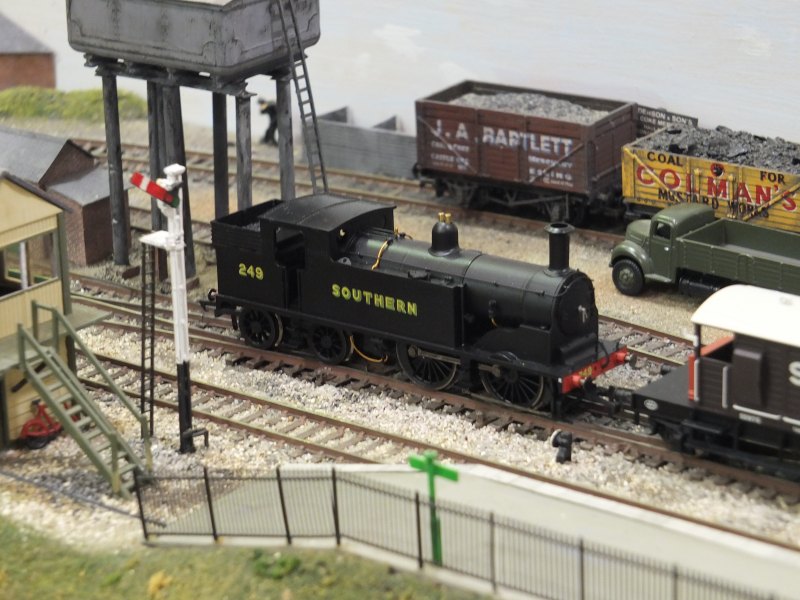 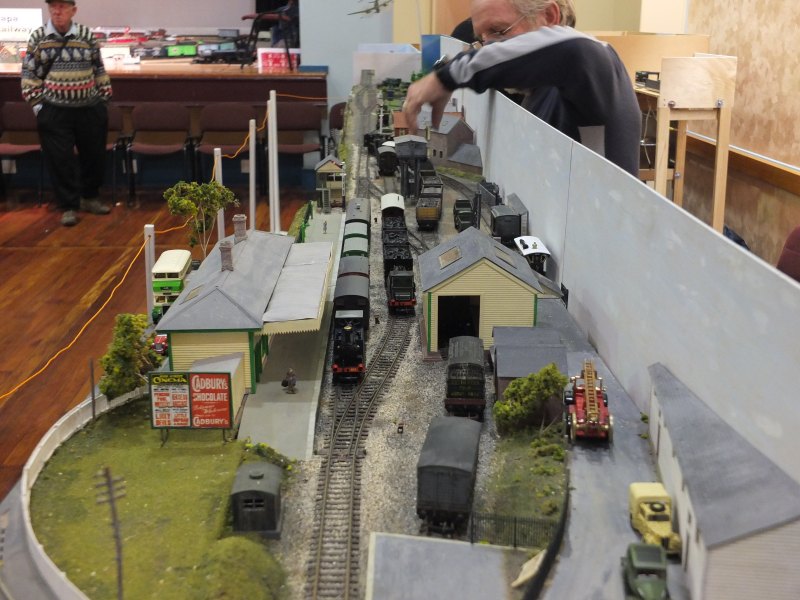 A nice selection of locomotives were seen working, and trains were mostly frequent. At one end trains terminated in a fiddle yard, at the other end a small station and yard provided lots of shunting. Unfortunately there seemed to be a few mechanical issues, with the odd derailment and stuttering locos being sighted a few times.

The final railway that caught my eye is a recurring favourite: "The Sherwood Light Railway". This is a small OO9 sectional railway, modelling a slice of rural Nottinghamshire. I particularly like this railway because it is small and cute, with nice locos and rolling stock. The track plan is simple, but still interesting. 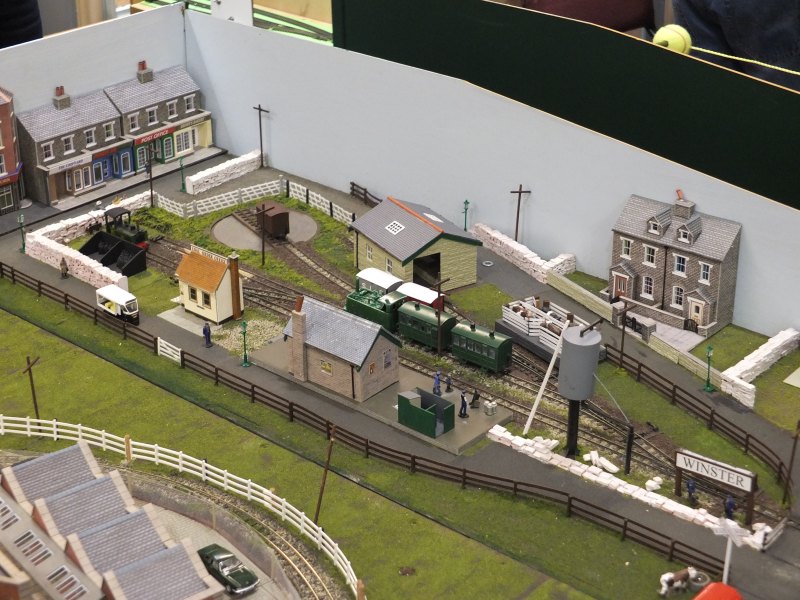 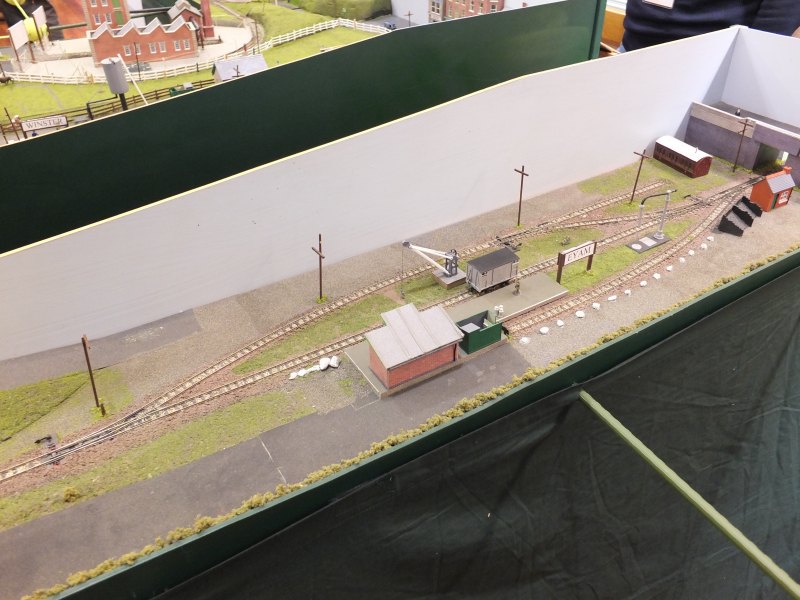 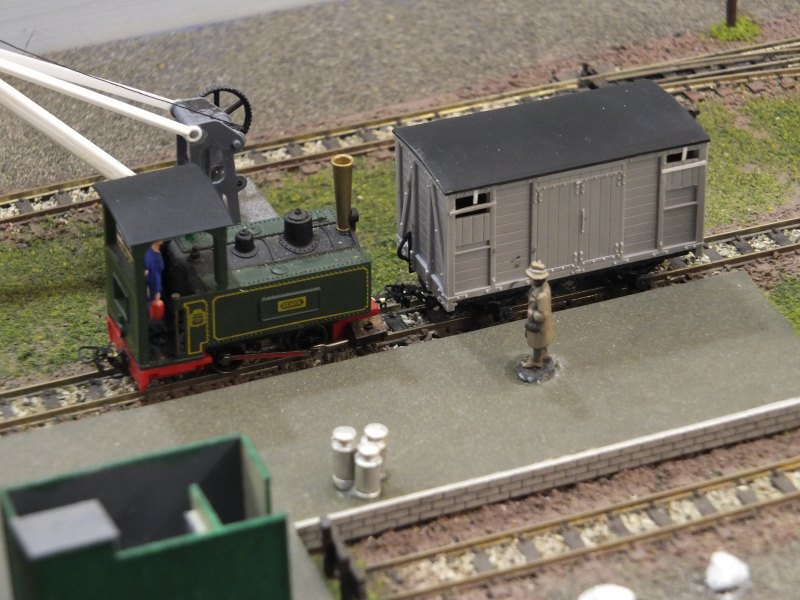 It has seen a bit of an extension since last time I saw it, but it still retains that sleepy feeling. The locos I especially like. There was a (very!) small 0-4-0 steam engine that growled like a angry bear, and a tramway style four wheeled steam engine, with skirted wheels. A mix of wagons rounded out the mix. Unfortunately there were electrical gremlins lurking in the shadows, causing a few refusals as trains went between baseboards, locos that stuttered, etc. A shame, as I could have sat and watched trains trundle by all day quite happily.

Overall, it was a nice show, but a bit same-same. It would've been nice to see some different railways, and definitely some more trade stands!

As for my purchases, here they are, trundling around with some much needed deliveries for Ranuska. They are an ideal size for the railway, and look great. 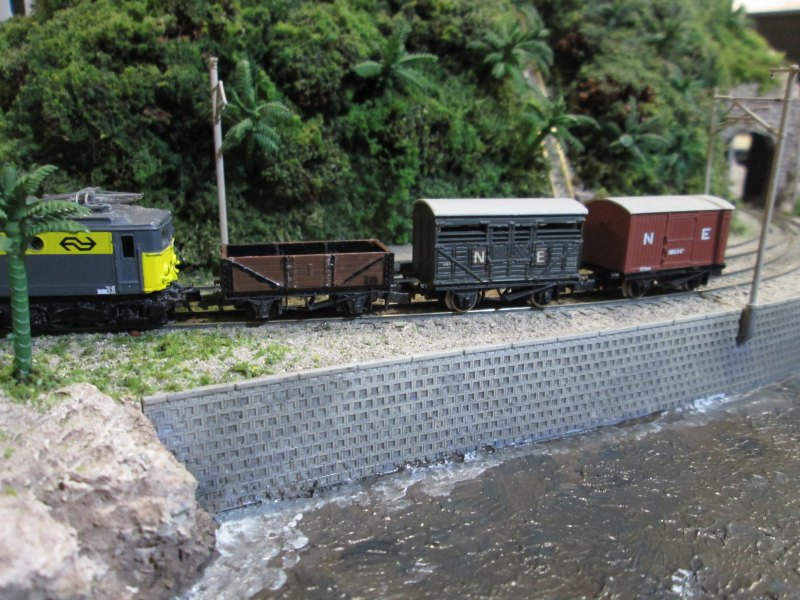 PS: Check out that sea!

The birthday garden shed
Ranuska gets a beach!