Work continues on my Breda LRV project after many many months of silence...

After a rather long break from Utrainia I am back and building things again. Perhaps I should explain the gap... first we rebuilt our bathroom, then as Christmas approached I built a garden railway, then I discovered we had a free laser cutter in town, and then I caught the bug and built my own laser cutter. 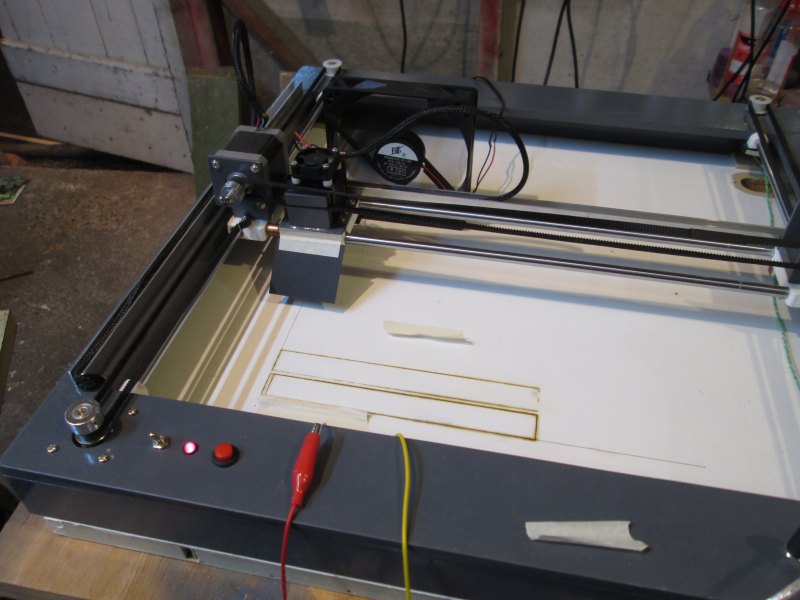 It's a little rough & ready and needs some fine tuning, however the important thing is, my 2.5W laser cutter is surprisingly useful. I am easily able to cut out cardboard up to 1mm think, and my offcuts of 1.3mm picture framing mat board cut beautifully. I can cut out thin balsa and basswood up to 1.6mm thick, as well as paper and masking tape.

The whole project has been very fun to build with only a small amount of head scratching, and Mrs A deserves much credit for graciously allowing me to take over the dining table for a month! Quite a few of my evenings lately have been spent out in the garage playing with it, discovering what settings work best for each material and adding features to the Visicut program I use to drive it.

Anyway enough of the technical side, what relevance does this have to the Breda LRV I've been working on?

Well last time I worked on it, I ended up with a fairly crude paint job that I wasn't very happy with. I experimented with flexible masking fluid on another project, however that left a sticky residue behind and again was reliant on a very steady hand. But now that I have a working laser cutter, I discovered pretty quickly that I could very easily cut masking tape... 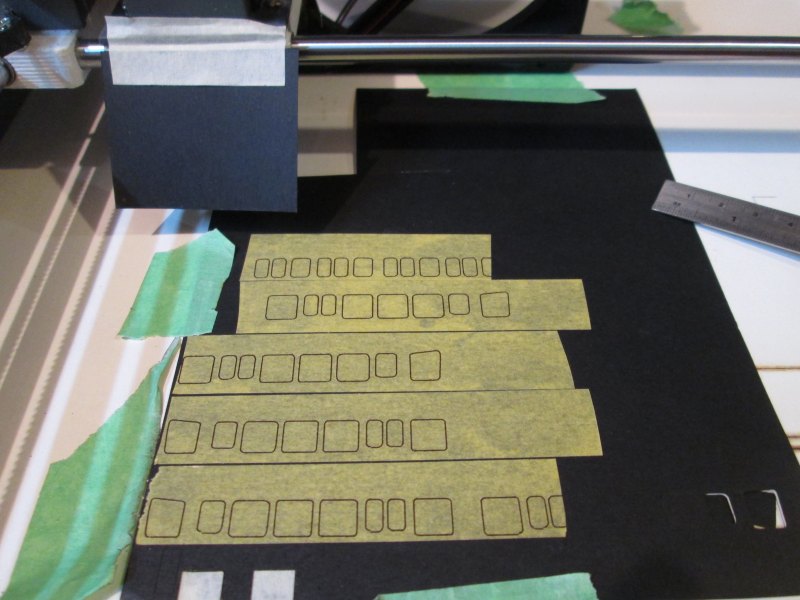 By sticking it on to thin black card, I can easily cut the masking tape without going right through the cardboard. So I quickly loaded up my Inkscape plan of the Breda LRV, clicked on all the windows, and chose "send to Visicut". Then I just selected "masking tape" as the material, "cut everything" as the operation (rather than, say marking, or engraving it), and clicked Execute.

A few minute later and I had a sheet full of perfectly cut window masks, complete with the curved corners! 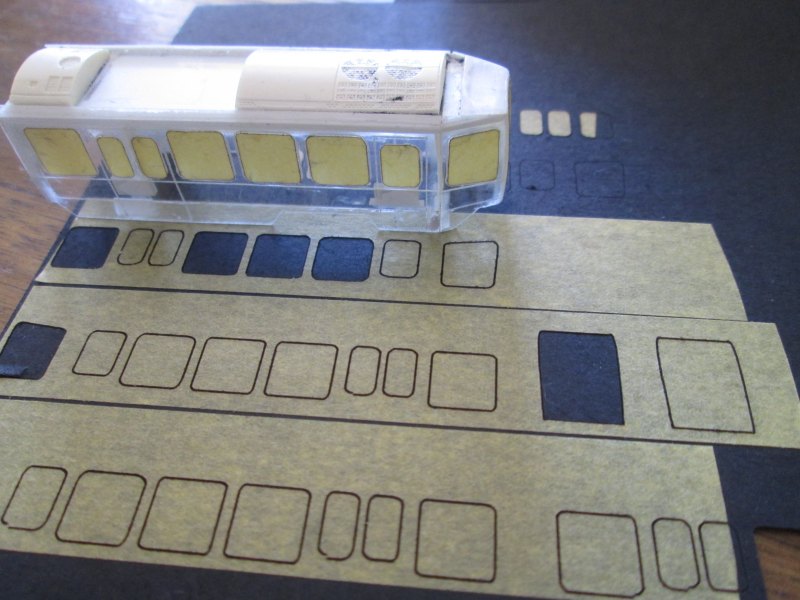 Back in side it was a few minutes careful work with a scalpel to transfer them into the model. Looking closely I can see how crude my original scribed windows were: 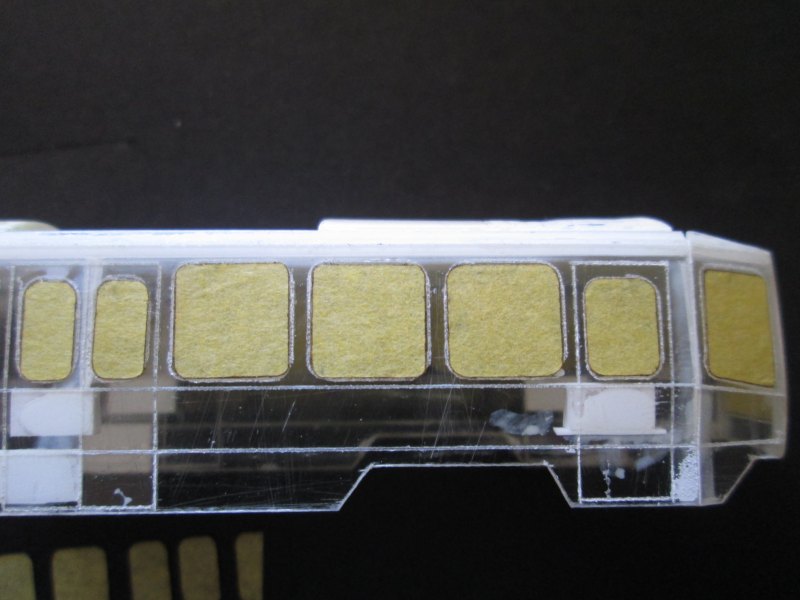 Next time I build a model like this, I'll cover the clear plastic in masking tape first, then laser all my windows and fold lines on. Then for near zero effort, I'll have all the windows perfectly positioned and cut out!

So with that done I gave the model a quick zap with paint and peeled off the masking tape. I was careful this time to undercoat the model in black, then spray on some Tamiya silver. The black undercoat makes the inside nice and dark, helping the inside fade away. 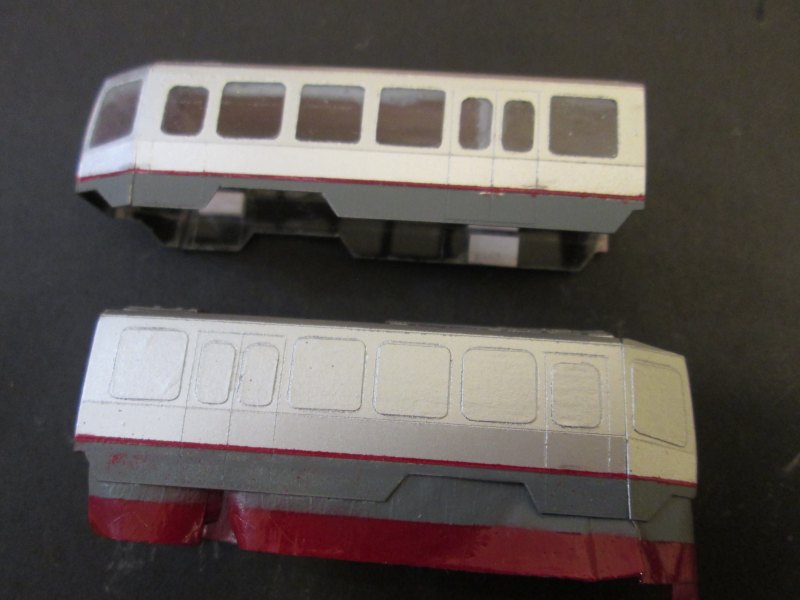 Much better! The red line came out a bit rough, next time I might experiment with a strip of red decal film, or perhaps some nail art striping tape (which will no doubt net much teasing from Mrs A!)

Next time... adding a motor.