While preparing a summary page of all the modules in Utrainia, I realised that I hadn't actually posted anything about the construction of my second module. Let's fix that...

I have a particular fascination with snow, and have spent many weeks in the USA trudging up hills through knee deep snow and chasing blizzards to get the perfect snow photos. I always enjoy it and I love the look of fresh snow on the railroad. So for my second module I decided to model a stretch of the BNSF "hi-line" in Montana, where the BNSF main line crosses Glacier National Park. Full of conifers and representing mountain railroading at its finest this seemed the logical place to model. This module is the transition between double track and single track mainline, and so features signals, a #10 switch, a switch heater (to stop the points icing up), a signal shed, and some assorted railway detritus.

The inspiration for the scene is this wonderful photo of the Burlington Northern and the Rio Grande battling it out against a raging blizzard:

What a scene! After some quick planning I set about building it.

First off, I measured up some wood, cut it and glued it into a very simple frame. I trimmed a sheet of 2" polystyrene insulation to size and glued it to the frame using some "pink stuff" polyurethane wood glue (great stuff, very strong and sets solid very quickly, but makes an incredible mess if any escape.)

While drying I marked out my track locations, then cut some cork roadbed to size and glued it too. I then worked out where the various scenery elements would go: 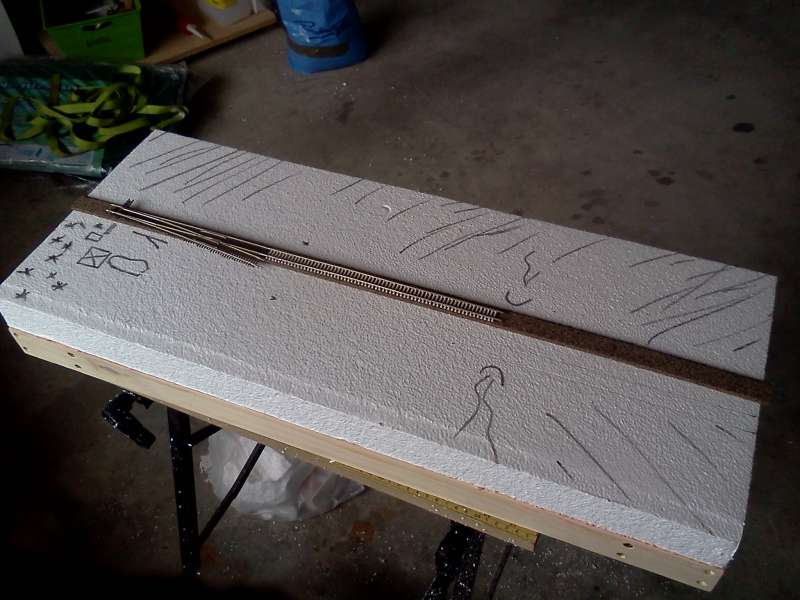 I decided on a sloping hill behind the scene, some kind of frozen water feature, and small hills on the front at each end. I also wanted a small cluster of items around the switch, such as a signal shed, propane tank and most importantly a switch heater.

I roughly sawed some poly to shape and stuck it down. The mess was incredible! 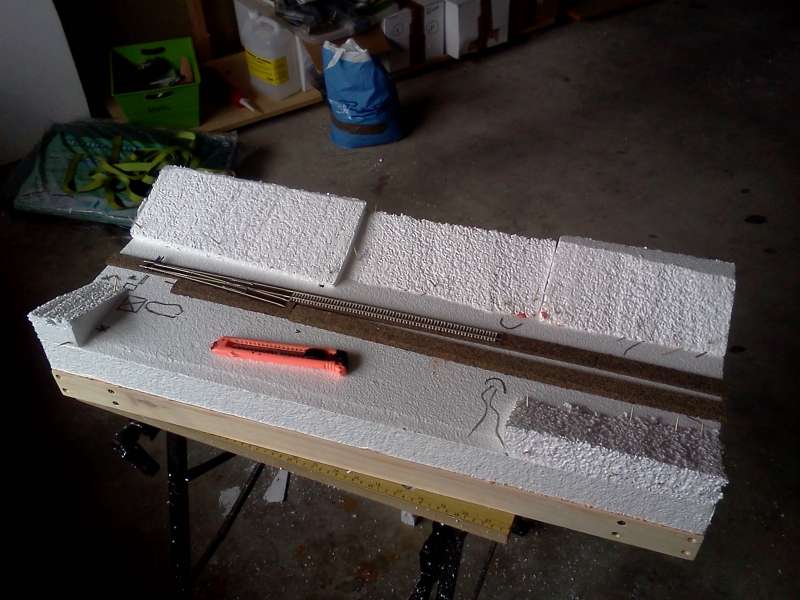 With the foam down, it was time to attack it with the surform tool: 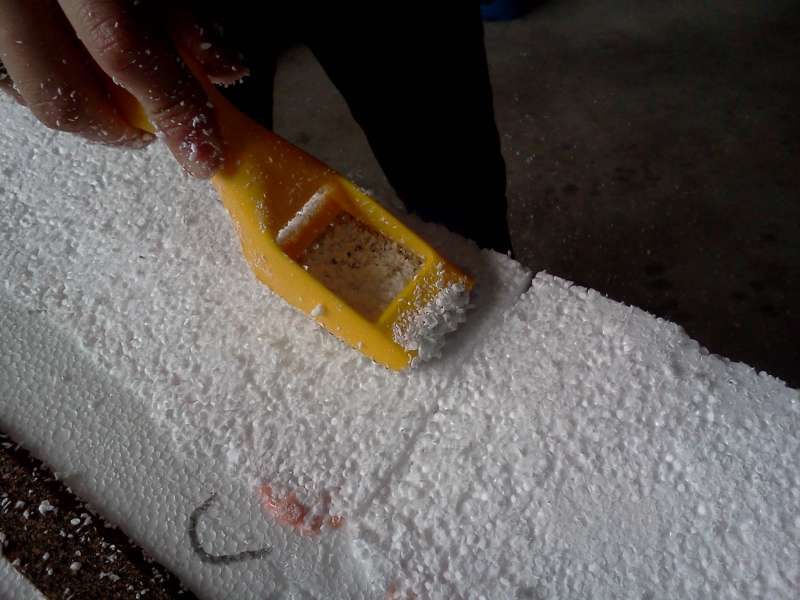 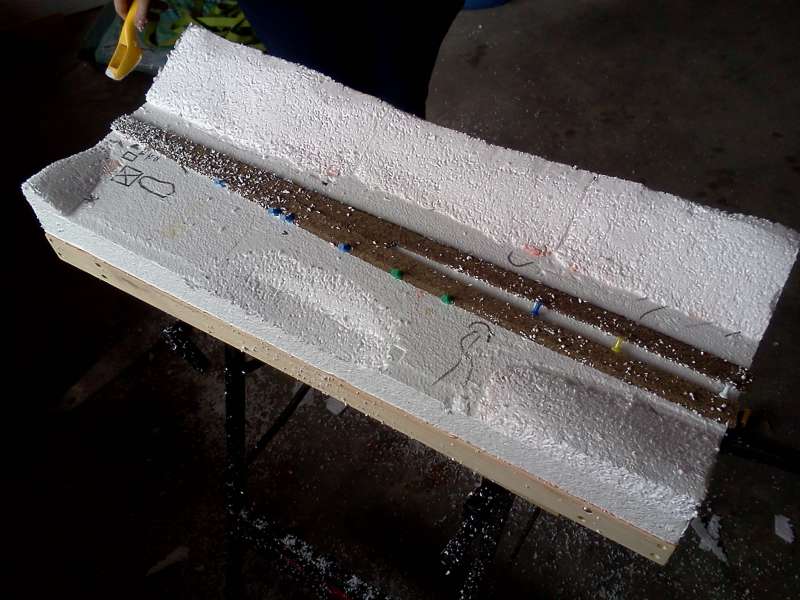 I decided that the water feature would be a large frozen puddle, figuring this would be less work than a steam.

With a rough scenery shell now made I smeared over a thin layer of plaster of paris: 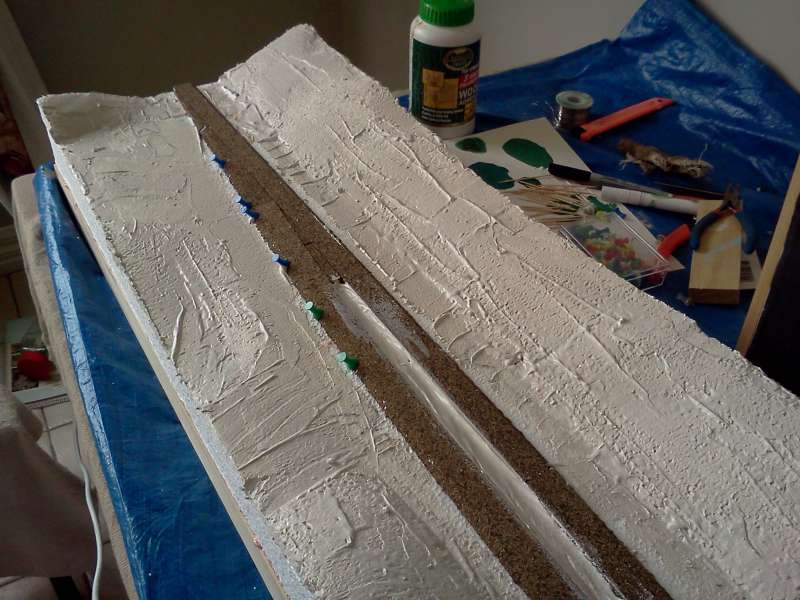 Once mostly dry the plan is to come back and smooth it off with wet fingers. However I ended up absorbed in an episode of Merlin and forgot until it was almost too late! No big deal, it'll all be well hidden by the time I'm finished.

I decided now to build the signal shed. Some rabid googling and rough calculations with an N scale figure, then some quick drawing on the computer gave me this: 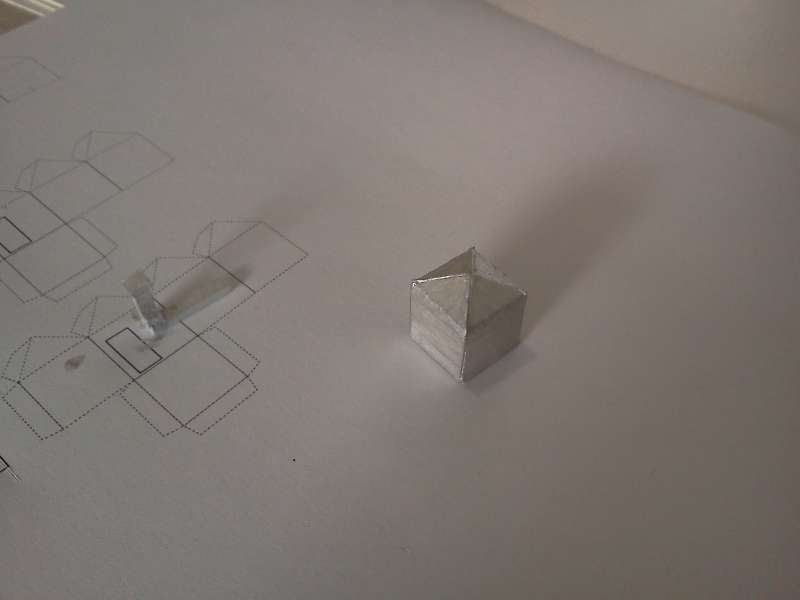 I printed him out and glued him together, than gave it a quick coat of paint. Very rough, but it'l do. I also made a barely visible switch heater assembly and turned up a propane tank out of an old pencil. While at it I trimmed some Micro Engineering concrete ties and glued them into a stack. 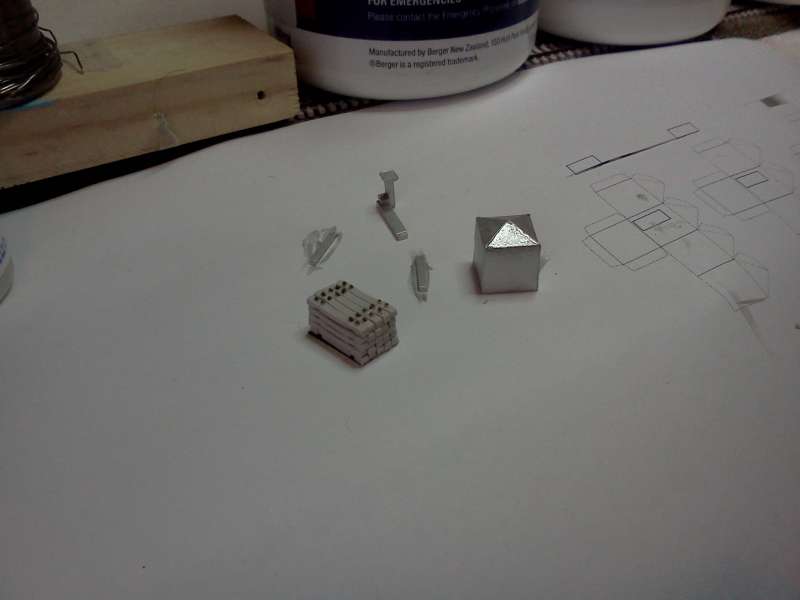 Here they are roughly in place. My track is now cut and trimmed, soldered together. The pin is holding down the end of the track as my 5 minute epoxy sets. 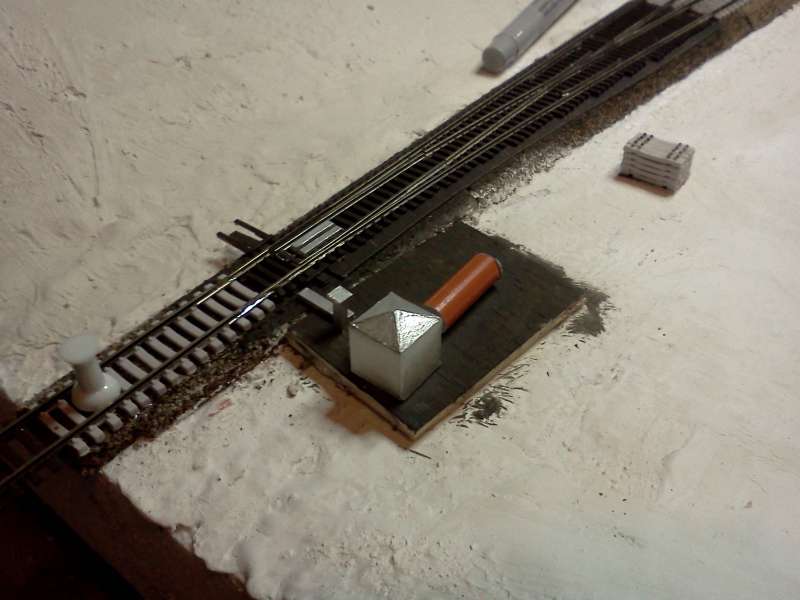 At the other end, a similar story: 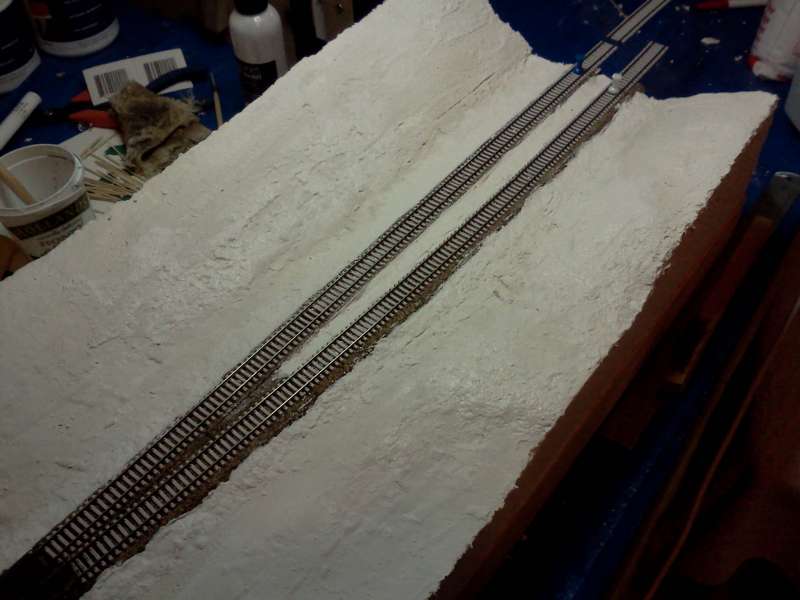 That's all for today. Tune in tomorrow for a tree production line.