Driving many outputs with Arduino C/MRI

The basic "hello world" example is fairly straightforward, wiring up a JMRI light to a physical LED on the Arduino board.

It's easy enough to extend this example to handle 5, 10, even 15 outputs... if you have an Arduino Mega, you could have a LED on every pin and have 48 LEDs driven by the one board. But what happens when you want to have 49 outputs?

By default, Arduino C/MRI emulates an SMINI node. The real SMINI is a small standalone board that talks directly to the computer, and handles 24 input lines, and 48 output lines. This number is fixed. Since it can't be changed, we have three options for expanding our inputs and outputs:

Lets look at each of these options in turn.

1: Emulate something bigger than an SMINI

The simplest method of handling more than 48 outputs is to emulate something bigger. There are two basic forms of C/MRI hardware:

If we configure a maximal SUSIC with 64 slots, each one with a 32 bit output card, that gives up 2048 outputs! Configuring that many outputs will take a while; I settled on 8x 32 bit output cards to test with.

The code changes to support a SUSIC are fairly minor:

This will give you 256 output lines from a single Arduino. To test, first set up a SUSIC node with 8x 32 bit output control cards: 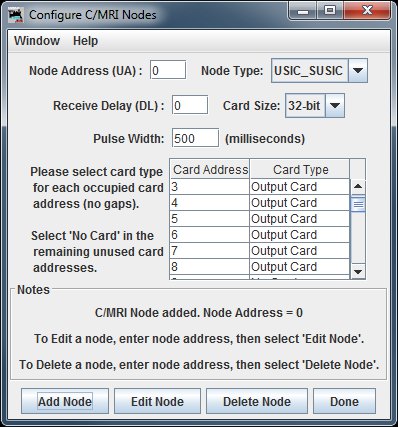 Then create a couple of lights (Tools > Tables > Lights), one at address 1, and the other at address 256 (JMRI has 1-based indexes for its inputs and outputs). Toggle each one and you can see the appropriate output LED lighting up.

This raises an interesting side question though: Arduino's don't have 256 pins, so how do we address that many pins? Luckily I have a tutorial on doing just that: Addressing many LEDs with a single Arduino.

2: Emulating more than one SMINI node on the same Arduino

This is an interesting case. C/MRI is bus-based, which means the protocol is built from the ground up to address multiple nodes. There is nothing in the protocol however which requires physically separate nodes, so with a few tweaks of code, we're able to quite easily make our single Arduino respond to multiple addresses.

Then in the main loop we differ a little bit. Normally we would just call jmri.process() which would handle reading in and processing the serial data. However that won't work with more than one node, as the first node clears the serial buffer as it reads it, so the second node will never get any input. To solve this, we handle reading the serial data ourselves. First we read in the serial data, then each node in turn processes the same piece of data.

To set this up in JMRI, you need to add a second SMINI node with address = 1. This can be done in the JMRI preferences window by opening the 'Configure C/MRI nodes' window, entering 1 as the node address, and then clicking 'Add Node' to add the configured node. 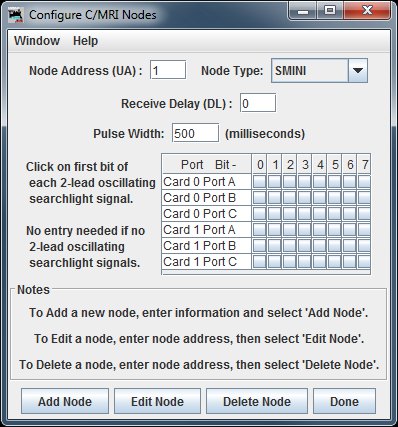 Then when setting up outputs (e.g. in PanelPro, Tools > Tables > Lights > Add...) you can enter the extended address for the nodes. E.g.:

This can be verified in the CMRI > List Assignments window: 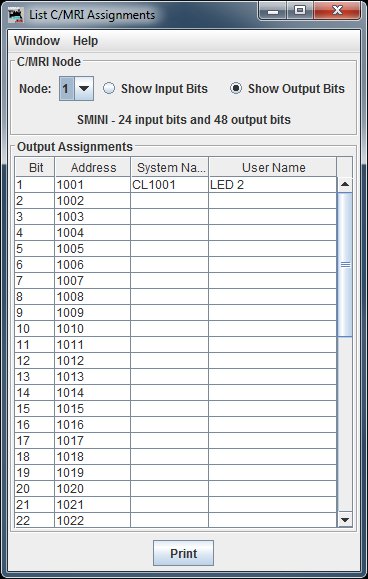 Here we can see that node 1 has the first output assigned.

Then in our code it is simply a matter of mapping CMRI outputs to digital outputs on our Arduino:

Emulating multiple nodes inside of one Arduino is one possible approach to expanding your outputs. But what if you need your nodes to be physically separate? Maybe they are on different modules, or there is a very long distance between them which makes running dozens of wires less practical? In these cases it may make more sense to have multiple physical Arduino nodes, each emulating their own C/MRI node.

The obvious approach to setting this up would be to add multiple C/MRI nodes in JMRI, each on its own serial port. Unfortunately while it is possible to set this up in the options, it does not currently work (as of JMRI 3.5.3).

Therefore the only option if you wish to do this is to create a bus arrangement that is almost identical to the real C/MRI system. It consists of two parts:

Since the C/MRI protocol is a "don't ask, don't tell" type protocol, no node should speak unless specifically asked to, i.e. it is a polled protocol. That means that access control is taken care of by JMRI. It will either be broadcasting output control packets onto the bus, or it will be asking a specific node to transmit an input status packet. While the latter is happening no other packets are transmitted over the bus, ensuring no collisions between different nodes and packets.

Such a set up will be the focus of a future article.

We now know of three different approaches to controlling more than just the default 48 output channels. Each has their pros and cons. By combining approaches 1 and 2, we are able to address many dozens of nodes, each with 2048 digital lines. And, if we wanted to, we could combine this with approach number 3 and place the nodes on a bus, letting us spread SMINIs and SUSICs all over our railway.

Making snow
Addressing many LEDs with a single Arduino