I've not detailed how I built the station, the church, and Rachel's Building. The remaining builders are either kitsets, or more of the same, so I won't bother going into detail on them. What I will talk about though is something fun Rachel and I did shortly after the grande-reveal, which is adding street lights.

We selected our street lights on eBay, and then patiently waited for them to arrive. Then it was all hands to the deck as we set about installing them.

First off we decided where we wanted lights, marked their locations, and drilled some holes. Now we needed to poke the wires and lamp pole down through the base, and through 2 inches of polystyrene. Simply pushing the wires down wouldn't work, the sharp tips of the wires would soon decide to head off in different directions and the whole thing would jam up solid.

So instead we came up with a cunning plan. Using a solid brass rod we cleaned out the holes of debris. Then we taped the wires around a feeder wire and one of us poked that through, while the other waited underneath for the wire to come through. 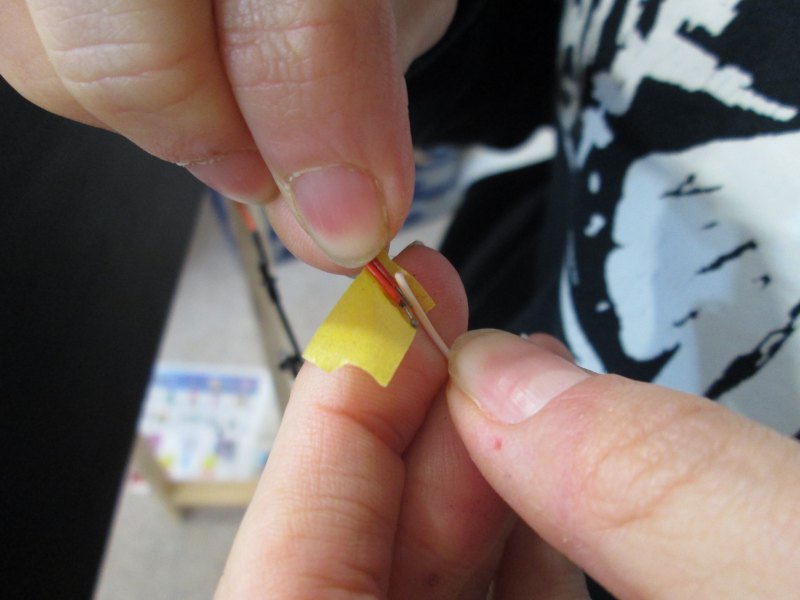 Then we carefully pushed and pulled the lamppost into position. 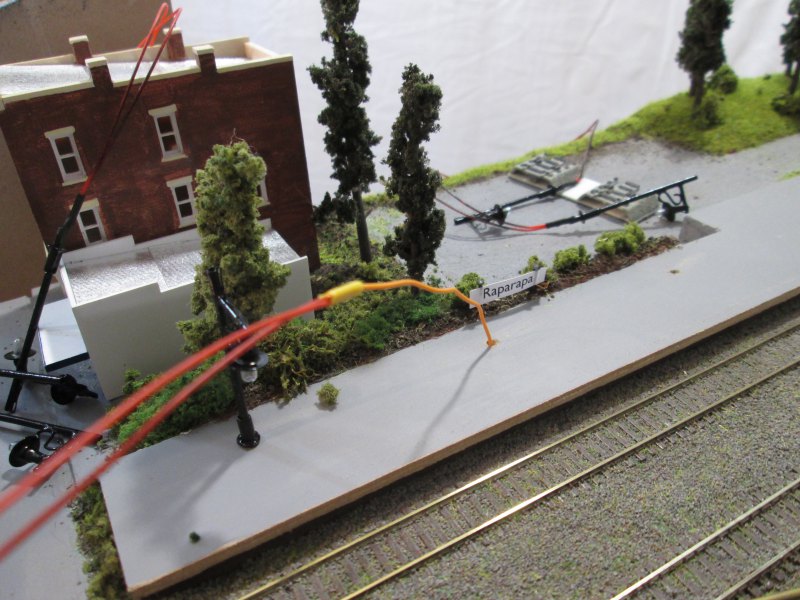 We worked out a process and soon the platform was done: 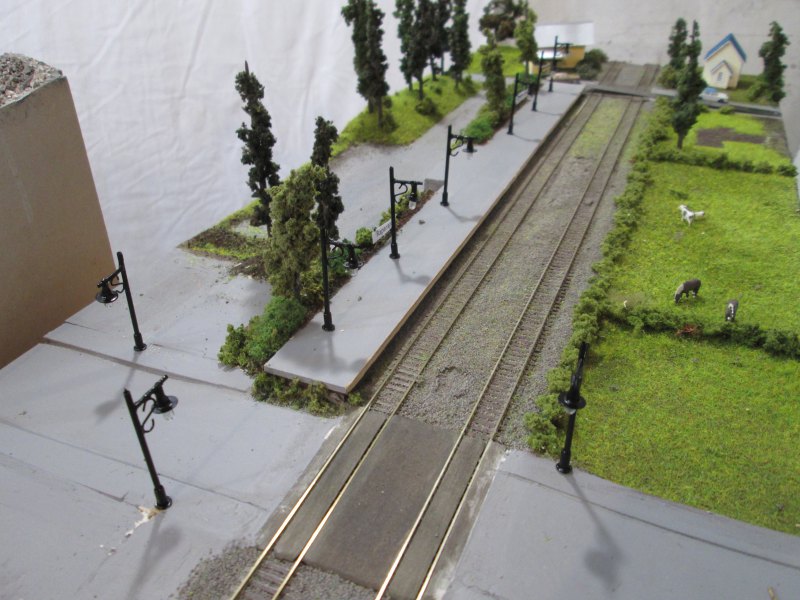 Street lights were a similar story.

The church needed a small light on its front porch, so I got the fun job of wiring up a 0603 surface mount LED and gluing it into position. Here we see me waiting for the glue to dry on the church roof. 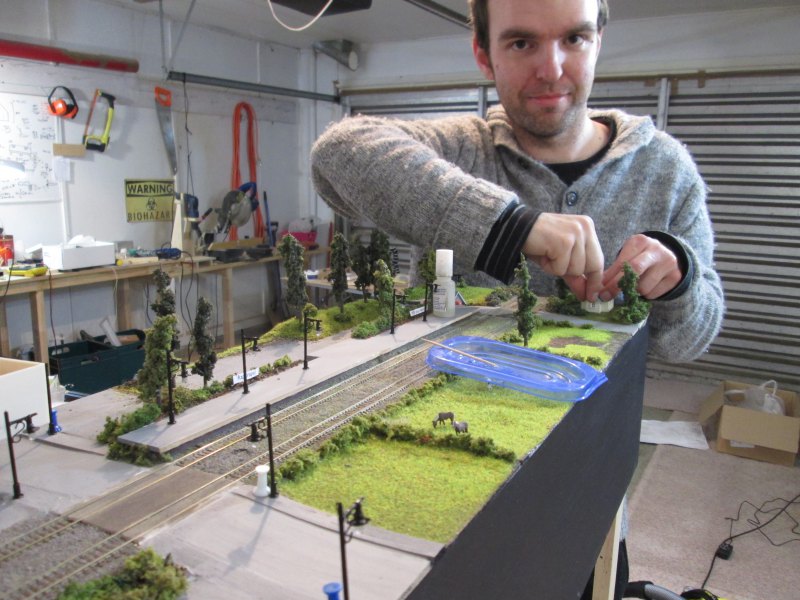 Soon it was time to connect up the lights to a power source. To make this easy I ran two strips of copper foil tape lengthways underneath the module, one positive, one negative. Then it was a simple matter of flipping over the module and soldering each pairs of wires on. A couple more wires to hook up to a power supply and bingo we had illumination! 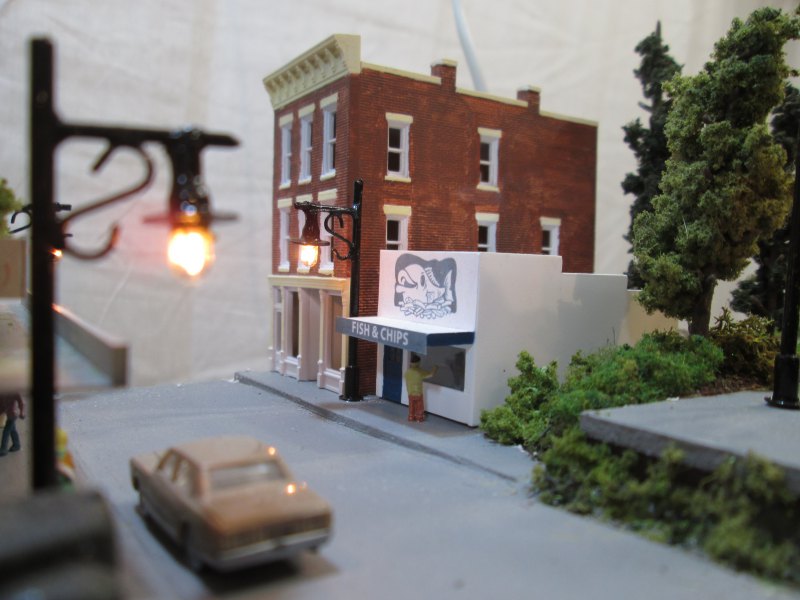 While we were at it, we took the opportunity to populate Raparapa. We had both bought some N scale people at the local train show, and I had a packet of farm animals too. 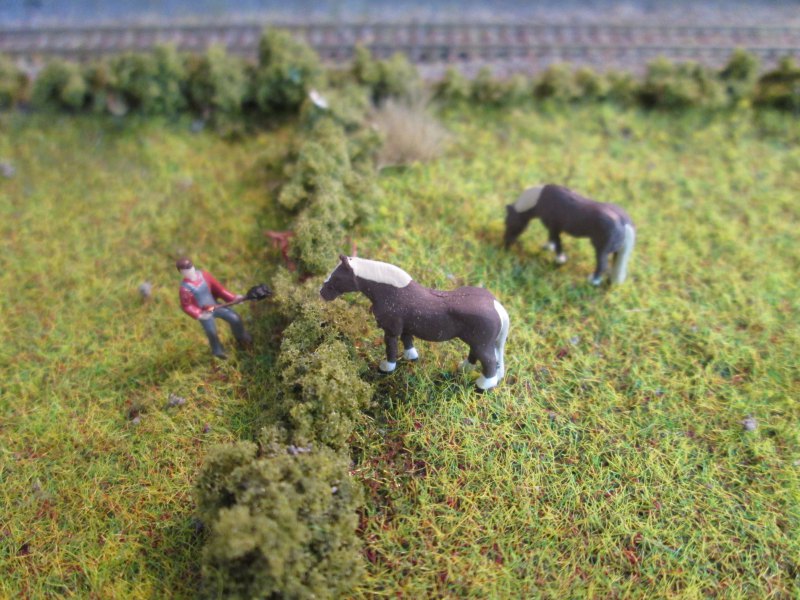 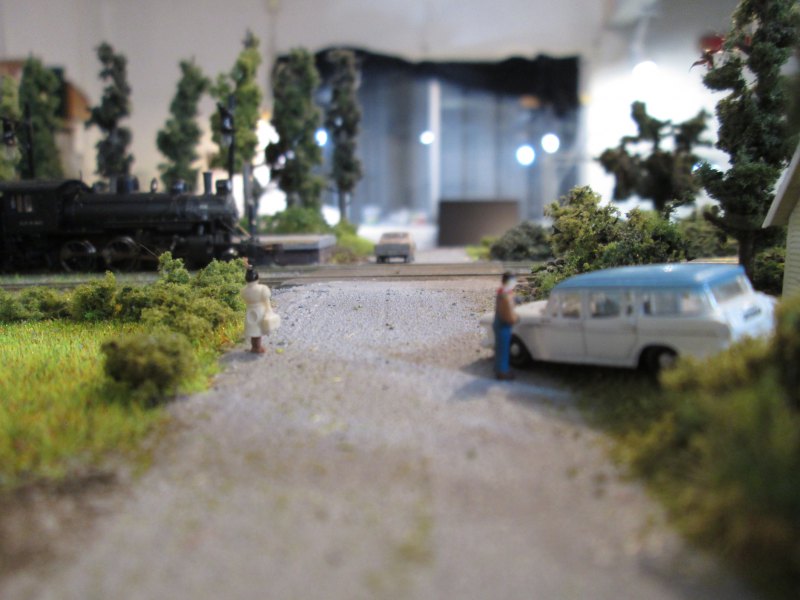 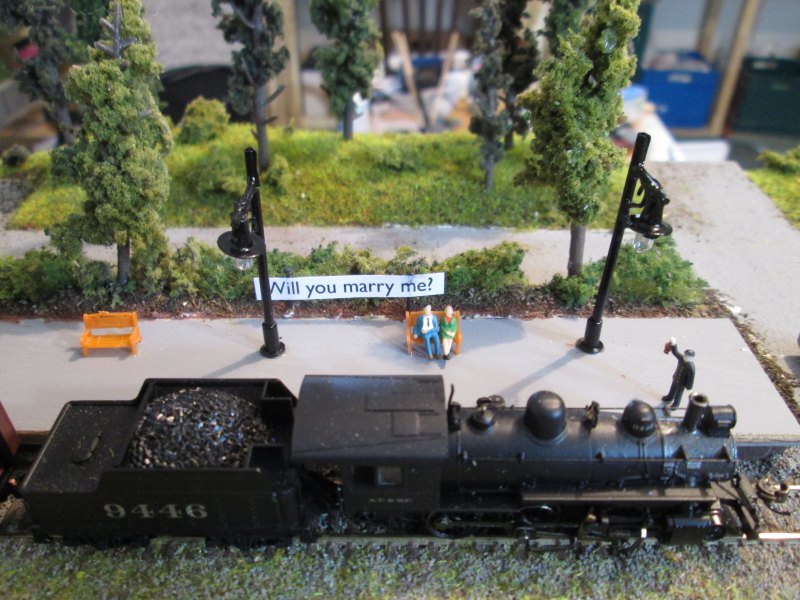 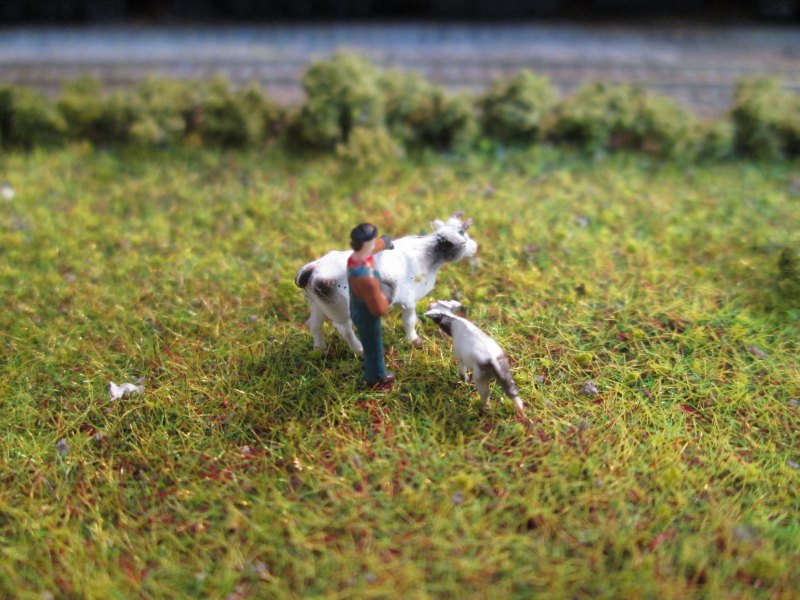 It seems there is a rather strong Easterly blowing in this photo. Hadn't noticed the leaning trees before. 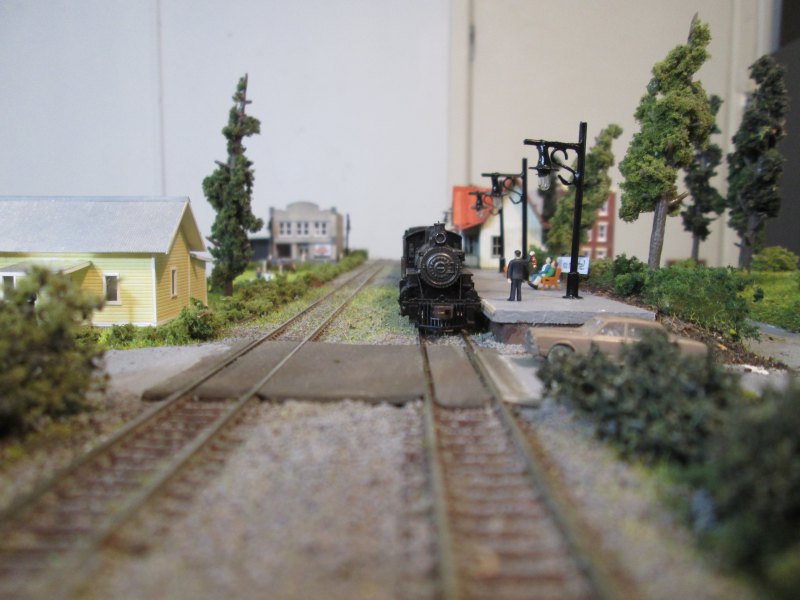 People planted, it was time to turn out the lights and have some fun with the camera. 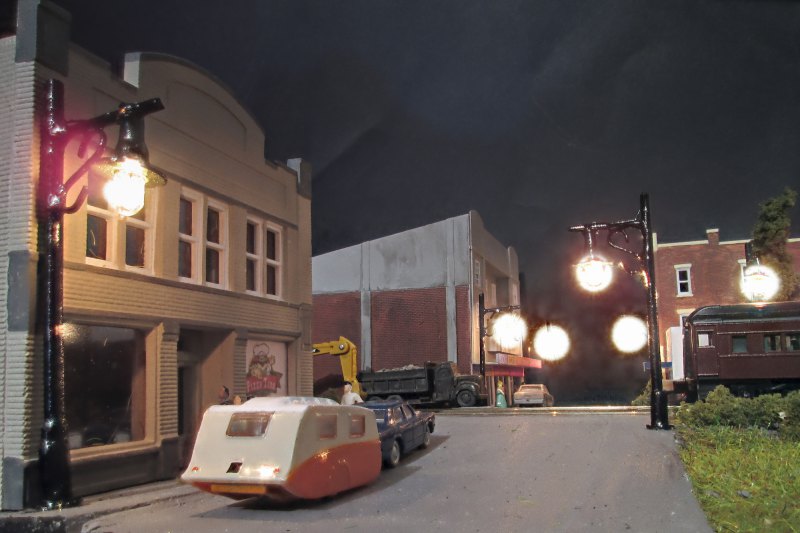 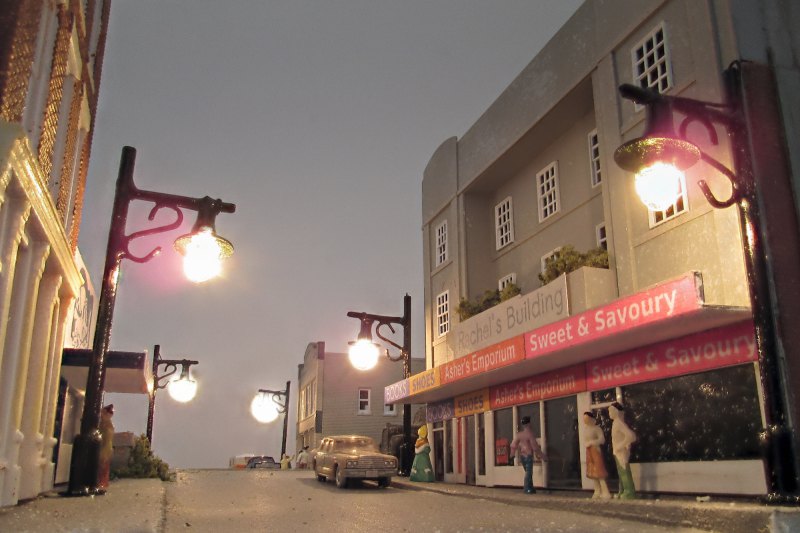