DCC for the Kato TGV

My Kato S14701 TGV arrived in pretty good condition, but still needed a bit of TLC before it would run. It dates from the 1980s and the wheels looked like they haven't ever been cleaned, but apart from that, all the paint is still in tact, nothing is missing, etc, so I think I did pretty well. However that said, if I wanted it to move at all, it would need a DCC decoder.

First trick is to dismantle the power car. The only outward clue is a small screw on the nose which must be removed: 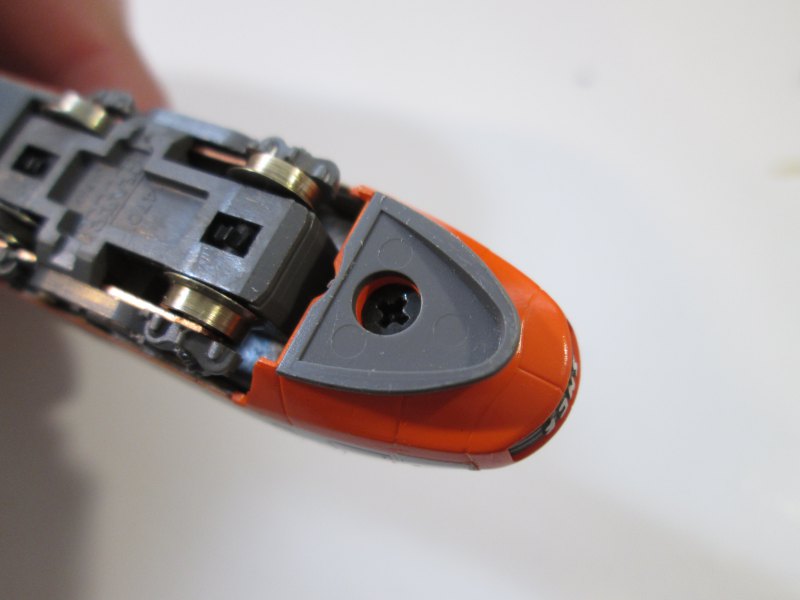 (Yes I know the wheels are clean here, I cheated and took this photo at the end!)

Then one needs to gently prise the body away from the shell. Do this front and back around each set of bogies. 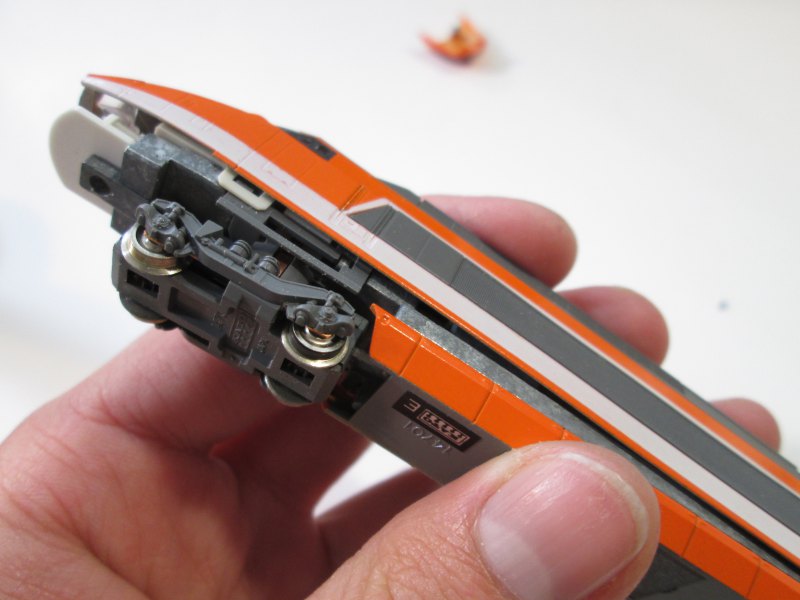 Slow lift up at front and back equally. The light board at the front is quite a snug fit and tends to hold the chassis onto the body. Once the body is removed you can pop off the fuel tank if needed. Otherwise just carefully unclip everything. Once done you'll have a nice wee collection of parts: 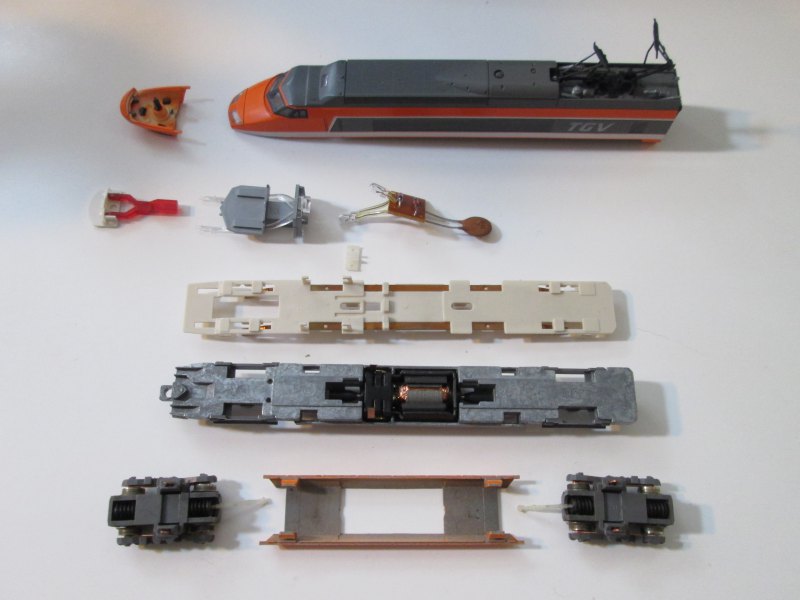 As I mentioned above, the wheels were gross. This poor thing wasn't going to move very far without a bit of cleaning! 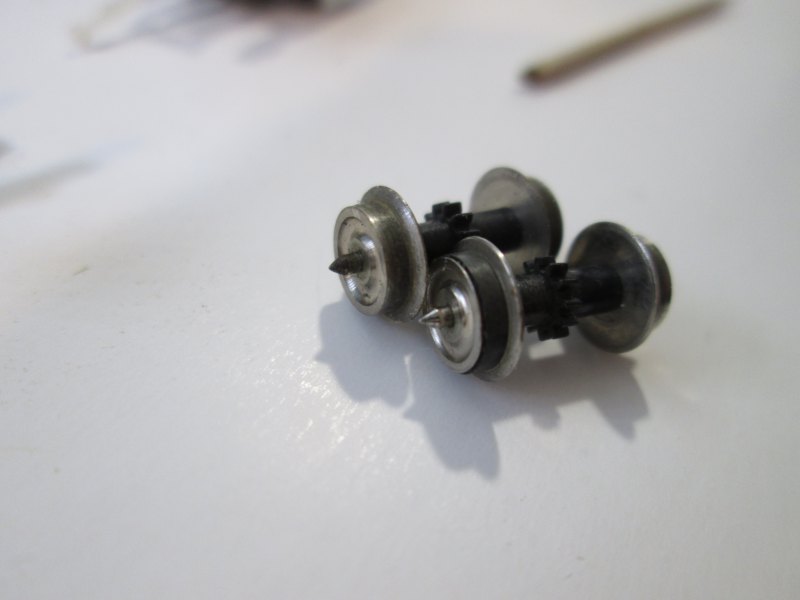 One wheel on each bogie is equipped with a traction tire, used to give the train extra grip, but unfortunately it reduces the number wheels collecting current to only 6. To clean the wheels I scraped off the tips of the axles, and tried to clean the threads with alcohol, meths, and then acetone, but none of them would budge the gunk. You can see the difference between the dirty and cleaned axle tips above.

To really shift the dirt, I had to resort to abrasion. I hate using abrasion on something as delicate as wheel treads, but this was an exceptional case. I reassembled the train, hooked it up to the power, and then very gently held a very fine emery board against each tread. 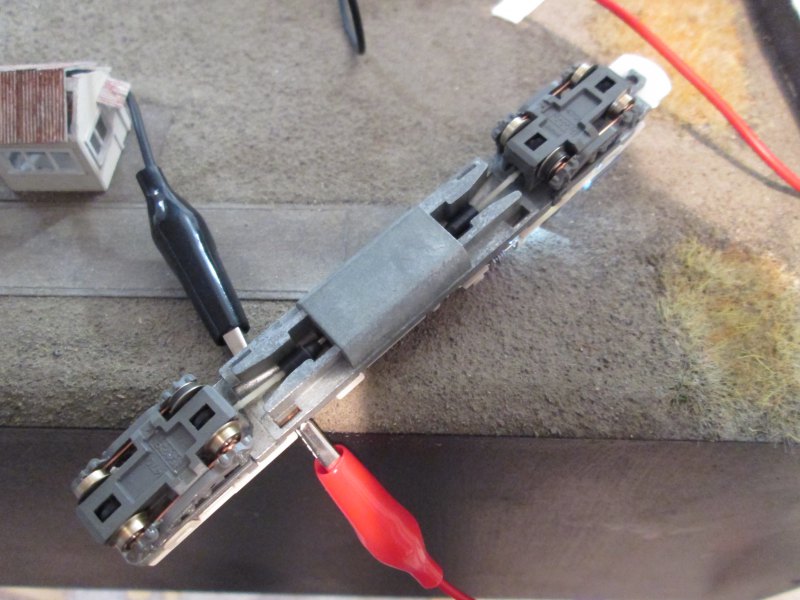 You can see the difference here between dirty on the left, clean on the right: (and a traction tire bottom right which doesn't count) 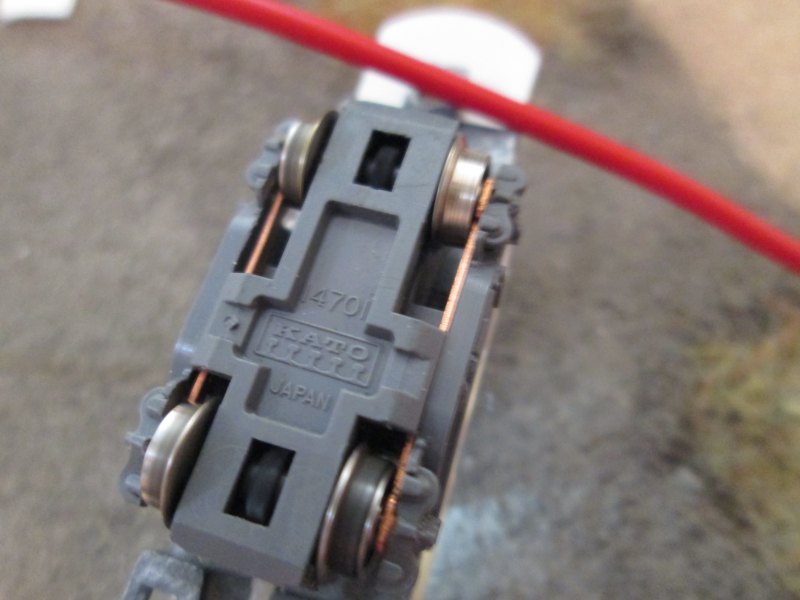 This soon cleaned things up a bit, though in future I'd use Brasso or similar metal polish instead â€“ I just didn't have any on hand. Once cleaned I applied a small amount of No-Ox-Id anti-oxidation solution to each tread and left them for 24 hours before cleaning off any residue with a paper towel. Theory has it that this will prevent any future oxidation. 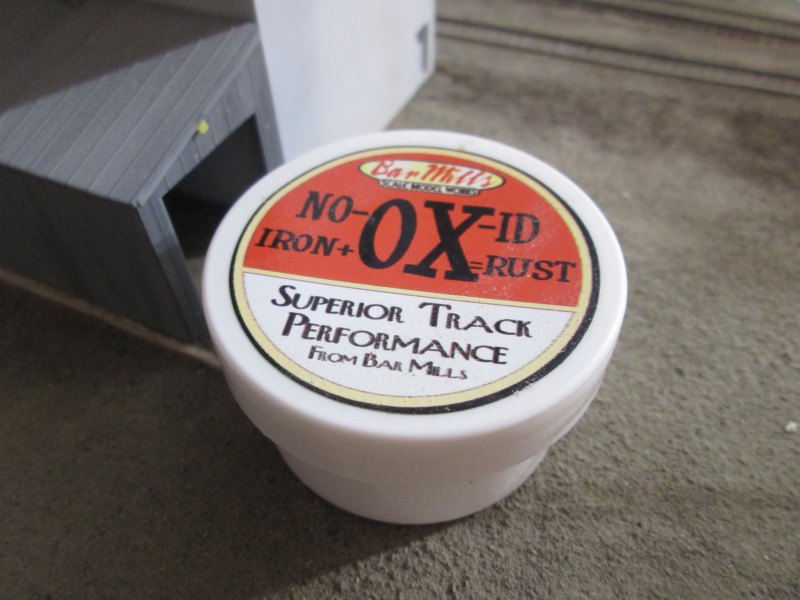 There was a fair amount of general dust, fluff, lint and gunk caught up in the bogies, so they received some attention at the same time. To dismantle them, press the two tabs inwards on the top of the bogie. I've started on the top bogie, while the bottom one is still untouched. You can also see the amount of grime on the poor bogies: 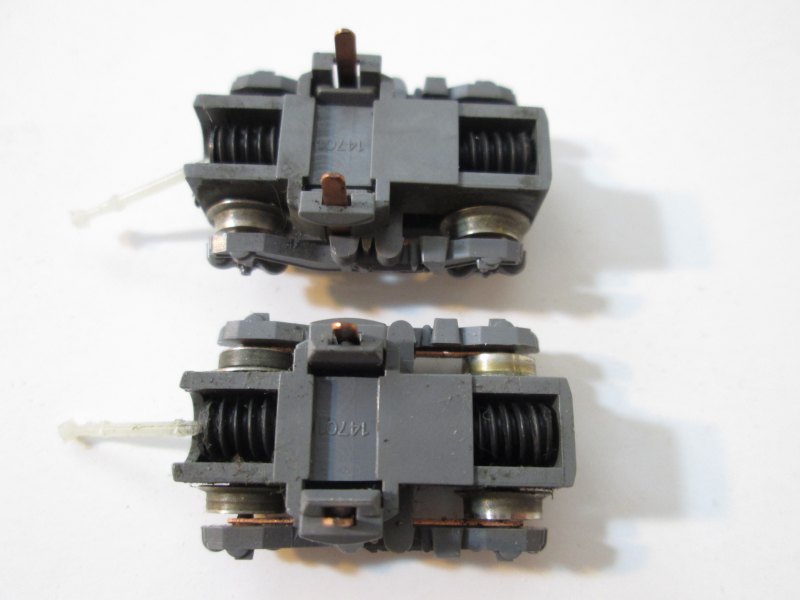 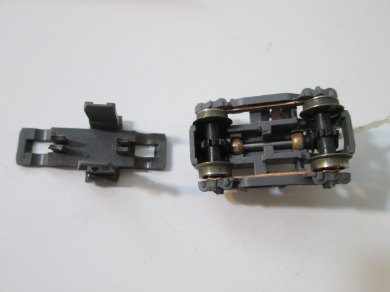 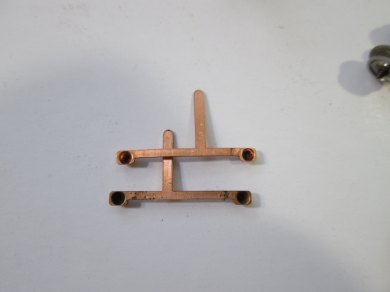 It's then a simple matter to push the brass contact strips out while prising out the wheels. I gave the pinpoints a good clean with alcohol and a toothpick before assembling them again. Everything else was given a good wipe down. Finally, a small drop of Conduct-o-lube was put on each axle point to help with conductivity.

Normally adding a DCC decoder is an exercise in mechanical and electrical contortion, but luckily there is ample empty room inside the body shell of the TGV so this was a pretty simple affair. I had on hand an economy Digitrax DN165H decoder which was pretty easy to find space for. The original light board was a pair of incandescents which I decided to replace with LEDs to save power and reduce heat. They also took up a lot less room, but next time I might keep the original light board since it's a bit of a trick to bend up the lower LED to fit. 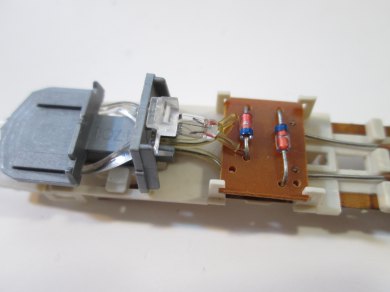 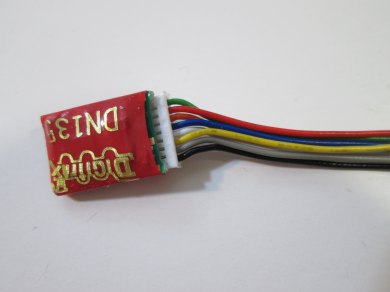 The light board was popped out, and the decider stuck down in its place with some foam tape. First two wires to attach were the power leads, read and black. The wiring diagram was specific about what colour should go where, but considering we're talking about DCC which is AC, I can't see it making any difference. I decided to follow along anyway. Before I did that though, I needed to insulate the the pickup strips from the motor tabs. This was done using some Kapton tape. Then I soldered the motor tabs to the decoder. 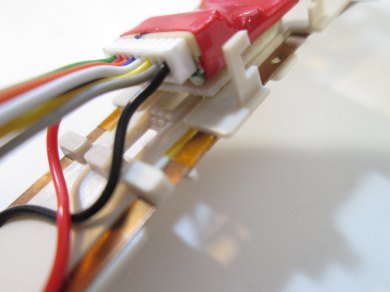 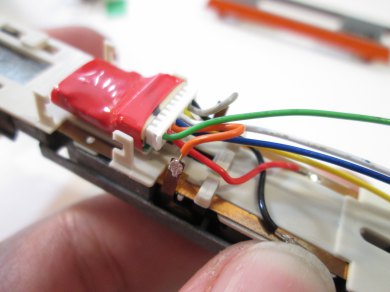 Turns out I had the motor wiring backwards and the decoder is a bit weird; if you change the normal direction of travel, it changes the headlights too. Sigh. So it was easier to just rewire things.

Wiring up the LEDs was easy enough, just took a lot of bending to get everything fitting nearly. 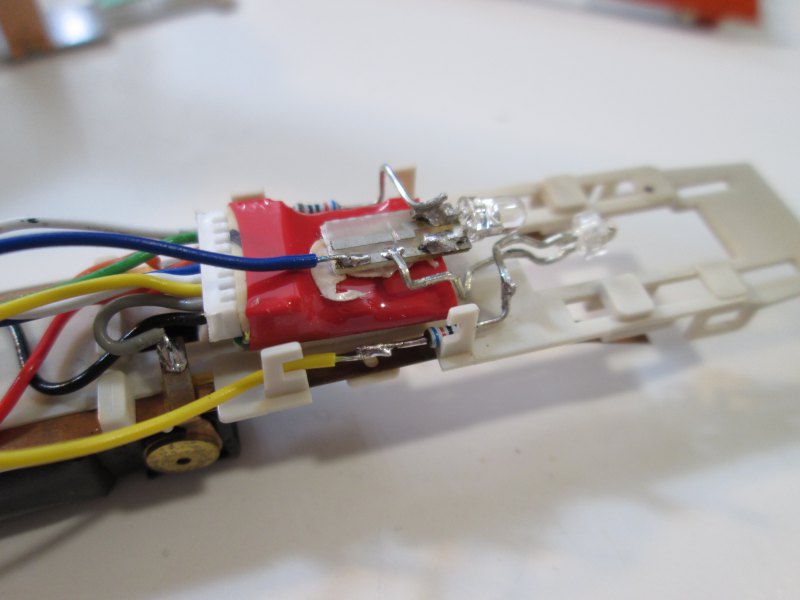 Finally it was ready to squeeze back into the shell and place on the test track. I gave it a quick test run and soon discovered that it was a bit of a speed demon; even on half power, it could probably keep pace with the real thing! The "ultra smooth" torque control feature in the decoder was also clashing with the motor and causing horrible shuddering with each speed step as it attempted to instantly slow the motor down and counteract any natural momentum in the system. Sigh. Our came JMRI and I soon wrestled the thing into shape with custom speed curves and the torque control disabled. Now it runs much better!

Seems the pantographs had suffered a bit of a tough life. 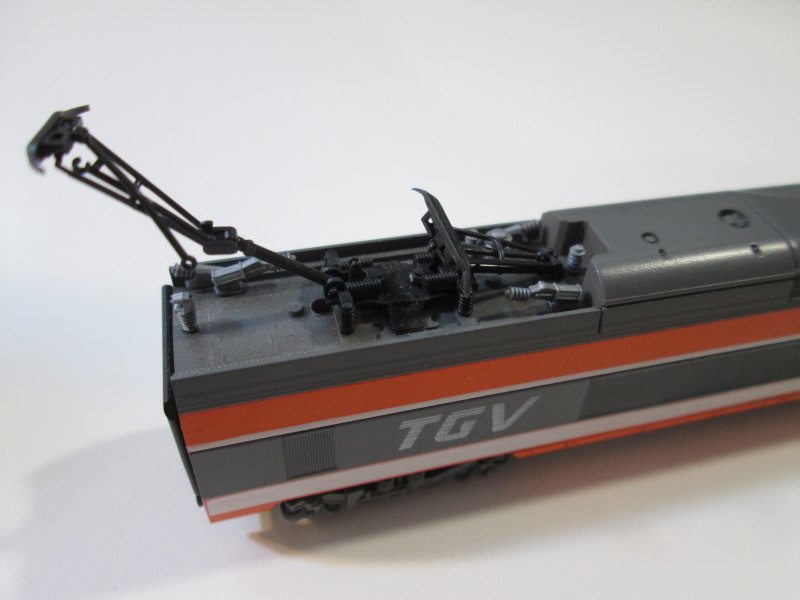 One was totally busted, the other permanently collapsed. The other end wasn't much better. Using a magnifying glass, very good lighting, and a pair of tweezers, I managed to wrestle the things back into place. Although hard to see, there are little plastic nubs, one on the centre arm, and one on the base. Amazingly nothing was actually broken and I was able to easily slip things back into place. 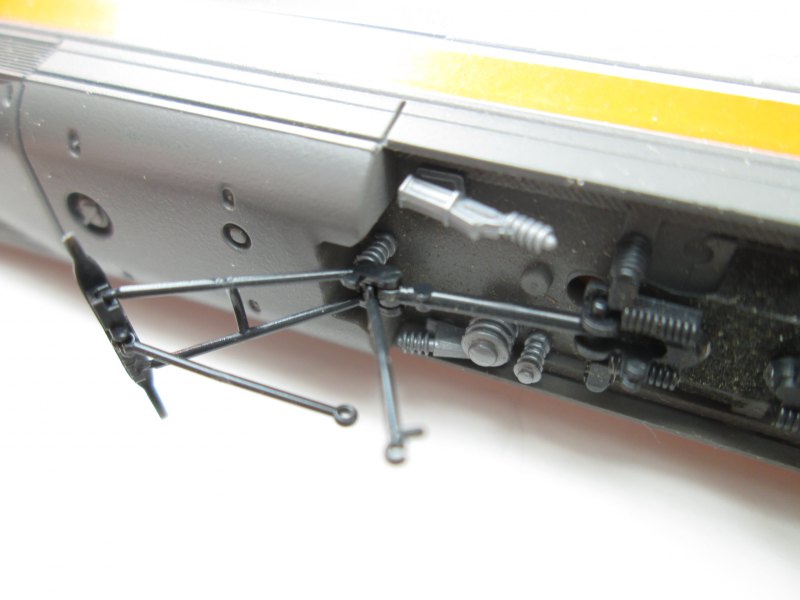 Soon I was looking at a drastically improved pair of pantos: 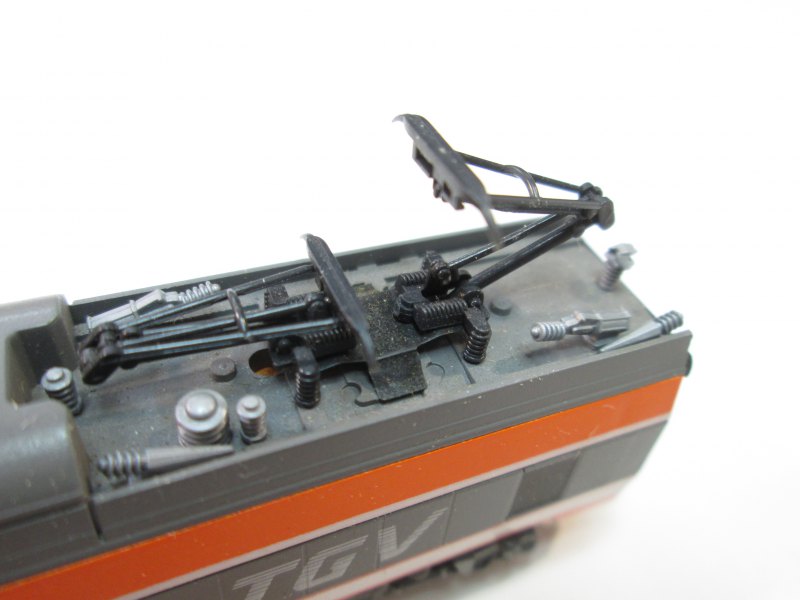 Now it was time for a test run. This soon highlighted an issue with one of the passenger cars; it was just too light, and would derail fairly frequently. A few bolts in the toilet compartment soon sorted that out! 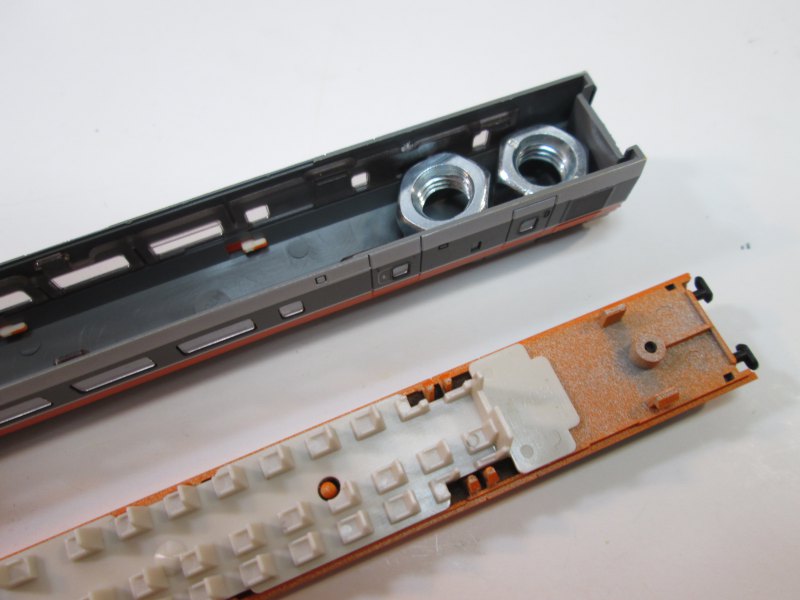 Total time: about 3 hours. Result: one vastly improved TGV. The Utrainia Government is very pleased with the result and it has been hinted that I may receive a pay rise next year as a thank you. 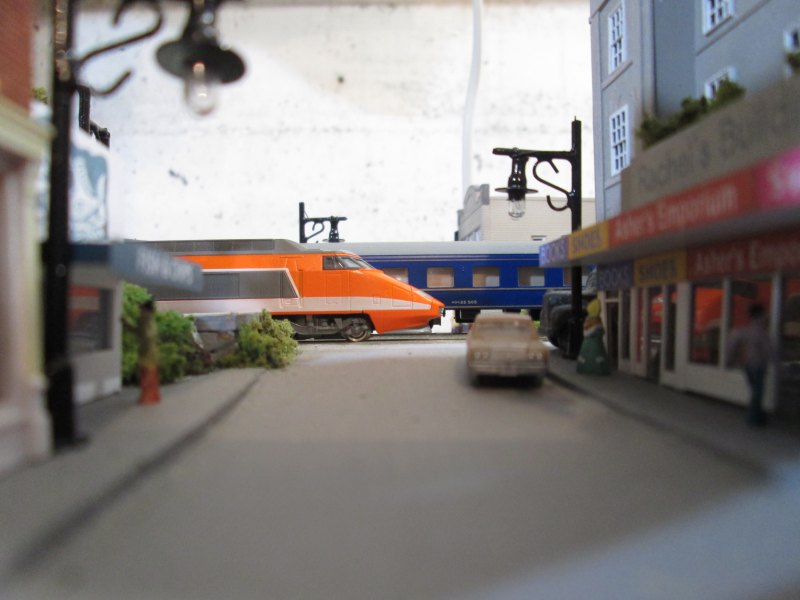