The Kato Glacier Express is a beautiful model of a very iconic railway. It's also the first European train that I've purchased. There is one glaring problem with it though: it's difficult to put a decoder into. I believe Digitrax now makes a drop-in decoder, but I don't have the luxury of such things, so instead I've spent the past few days hard wiring an NCE Z14SR decoder into it. 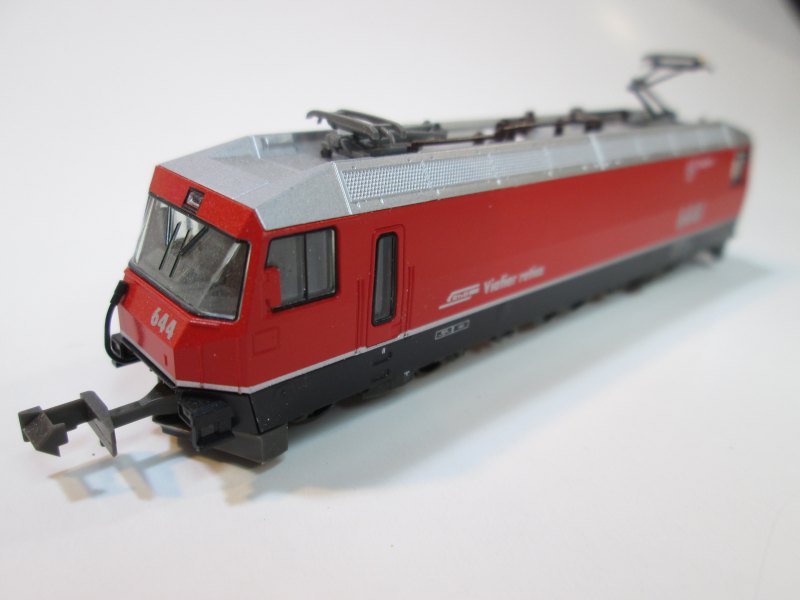 The first step is to completely dismantle the loco. Start by gently prising the sides apart so that the top pops off the chasis. 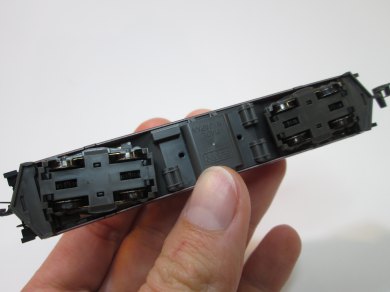 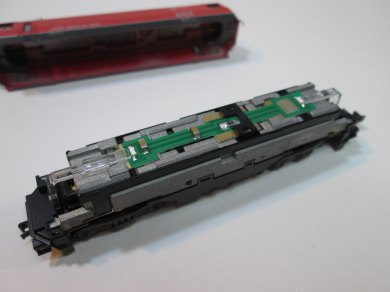 Now carefully extract the existing PCB. You will need to carefully nudge the light tubes out of the way, in fact it would pay to remove the coupler and light tube assemblies now. The PCB needs to be lifted and slid at the same time; key is to go slowly and gently, it will eventually come free. 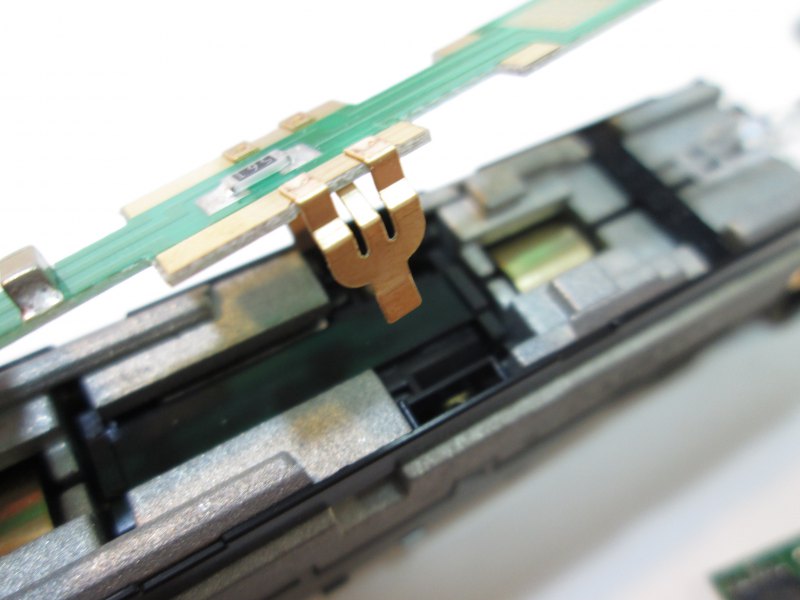 Slowly but forcefully pull the bogies out by gripping and pulling down. Now remove the fuel tank assembly.

Finally carefully remove the black plastic ring around the top. There are a few hidden tabs here and there so go slowly and gently again. The chassis can now be separated. 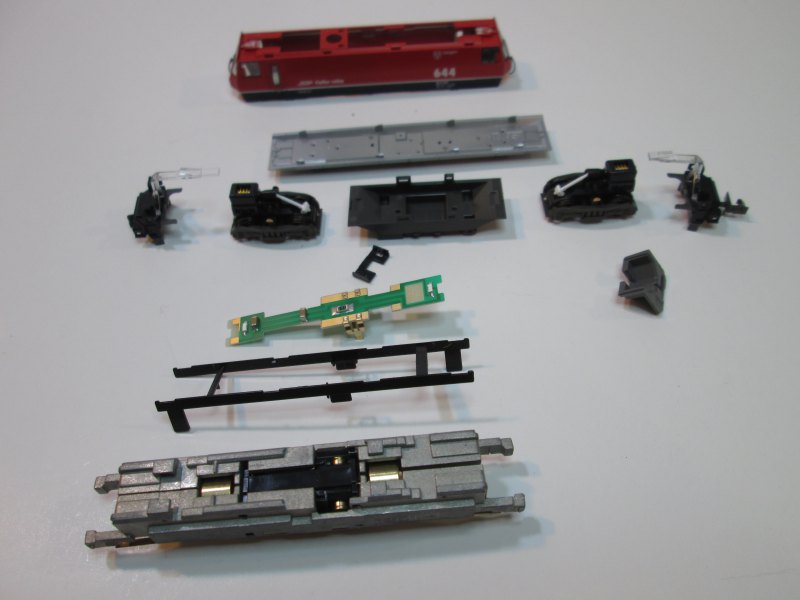 Now we need to solder some wires onto the motor. This is a very delicate operation, as more than a split second of heat will melt the motor bushings and spell almost certain disaster! I know because I had a very close call. I would suggest using a hot soldering iron and a small amount of flux. Place some solder on the iron, tape the bushing and remove the heat. Now tin your wire, hold it on the bushing, tap again and melt the two together. Do not let the bushing heat up and melt the surrounding plastic! Each tap with the soldering iron should not last more than a second. 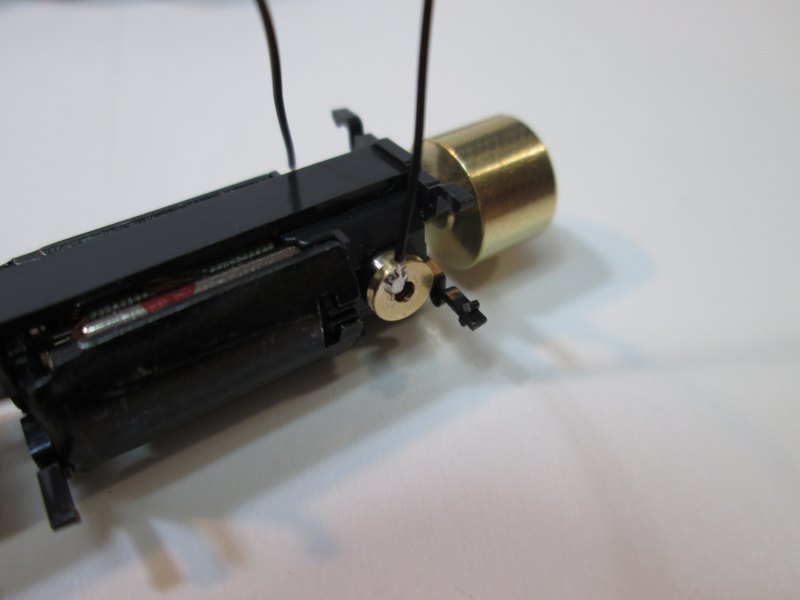 While there add some insulation (Kapton tape) to the frame so the motor doesn't short against it. I needed to mill the chassis down a bit so my decoder would fit, so I did this at the same time. 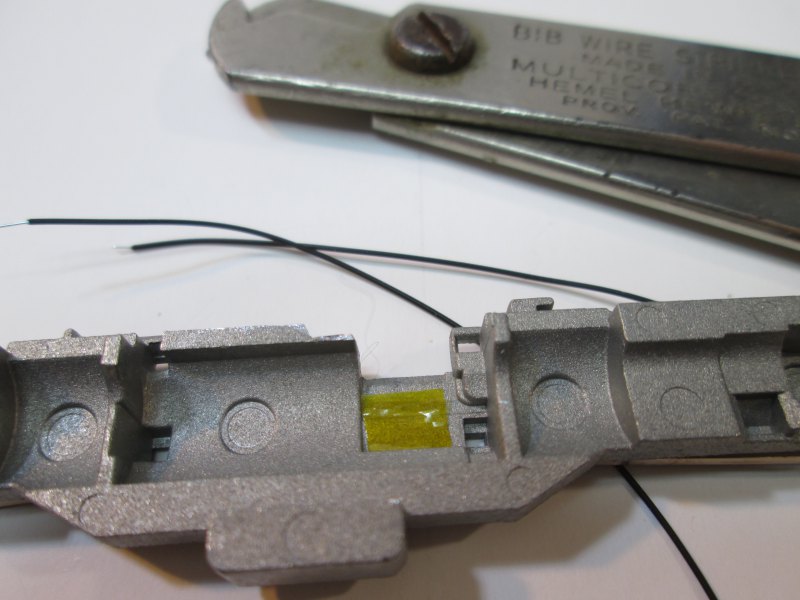 With that done, reassemble the chassis, taking care to feed your feeders through the holes in the black plastic ring: 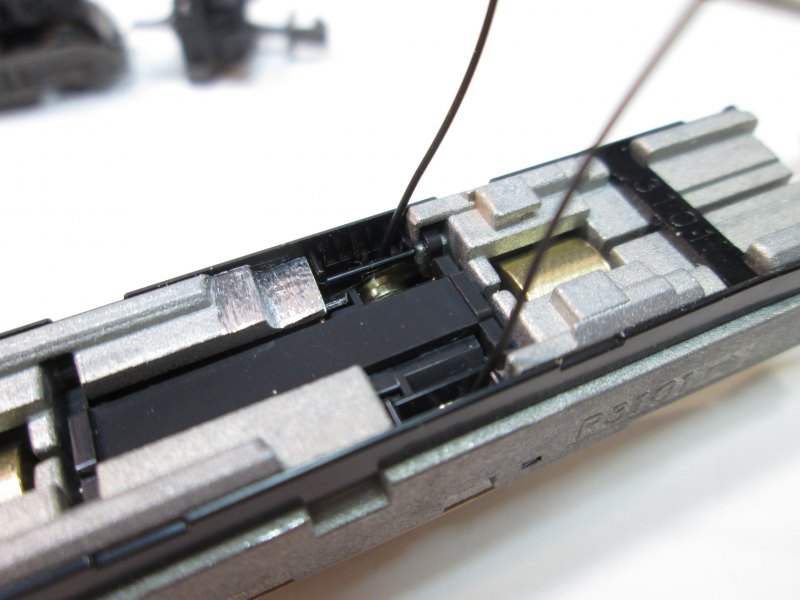 You can see where I filed down the chassis to clear a capacitor on the decoder above.

The decoder I'm using is one of the smallest available, an NCE Z14SR. 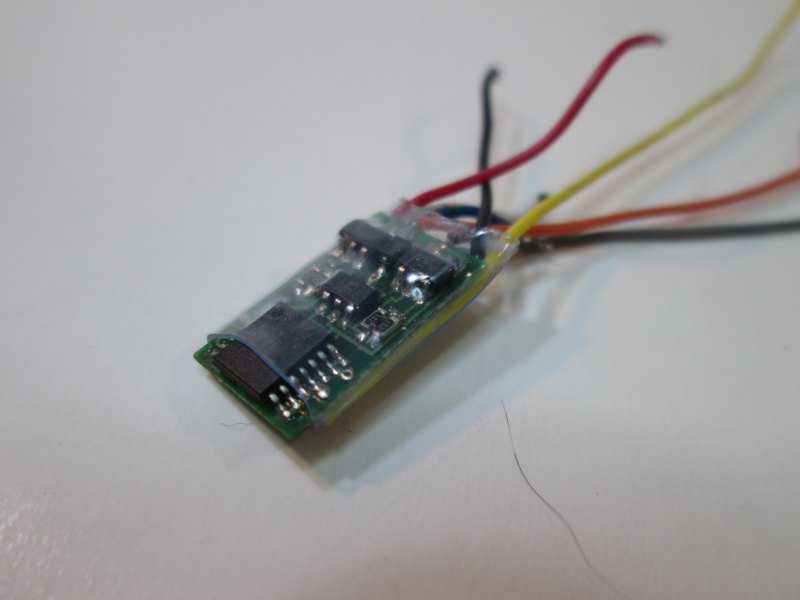 Even that is too large however and I had to remove the plastic heat shrink from around it. A test fit with the body in place but roof removed showed that I had just enough roof to fit everything in, provided I can replace those wires with something thinner.

I decided to keep the existing light boards, which meant chopping out the middle of the PCB. I also had to modify the traces a bit to isolate the LEDs and add in an extra resistor for the second headlight. 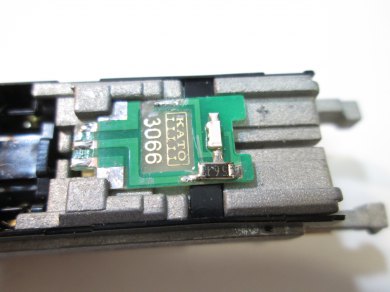 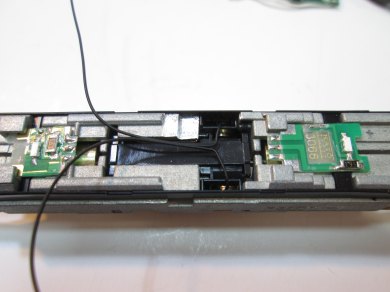 Connecting it all up

I've got some leads on the motor, and leads for the headlights, so now it's time to connect everything together. I started by replacing each wire on the decoder with some super thin wire-wrapping wire, making sure everything was neatly bent into place. 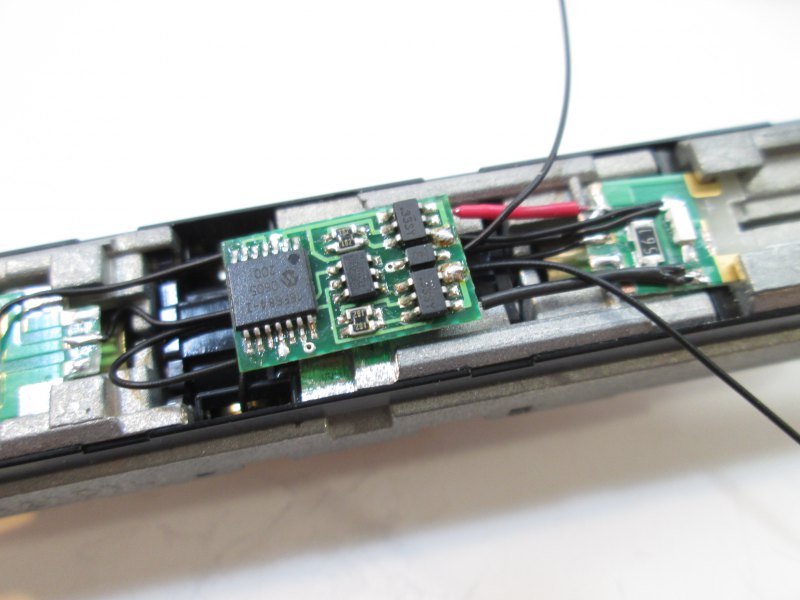 While in there I adding a bit of insulation under the decoder so it wouldn't short out on the frame. Then it was time for a test! 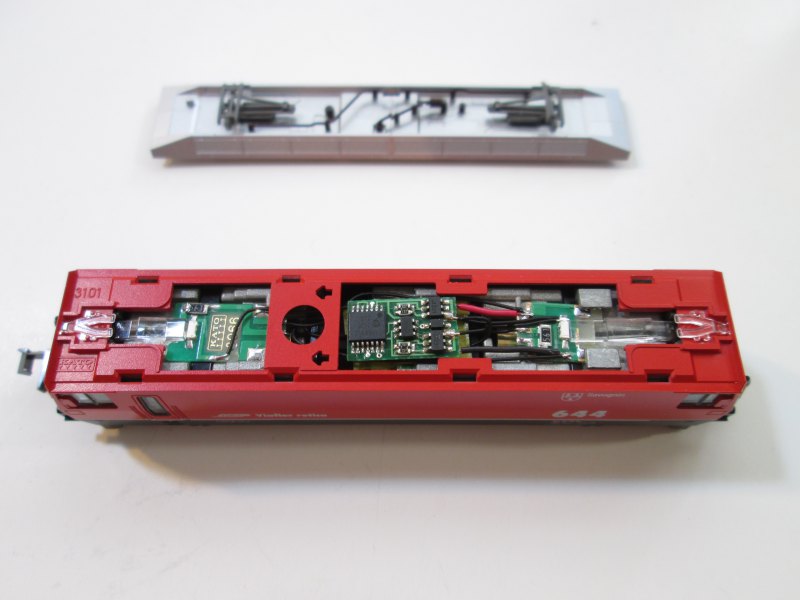 Everything fitted in which was good. Nice compact installation if I may say so. I gave it a check with the multimeter, then a run on the track. It worked perfectly, except for the read headlight which wasn't working. I did some tests and discovered that I had cut the resistor out of the circuit and was applying the full voltage to the LED. Oops! I carefully removed the old LED and soldered in a new one. 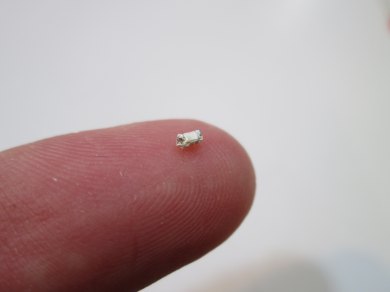 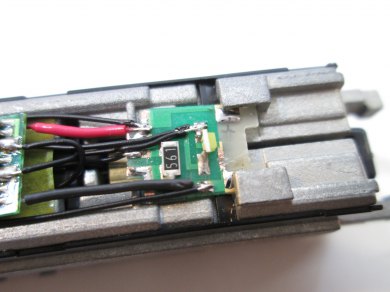 I put the loco back together, but it looked a little empty in the cab. So I rummaged around and found some scrap people, chopped their legs off, and glued them into the cab. 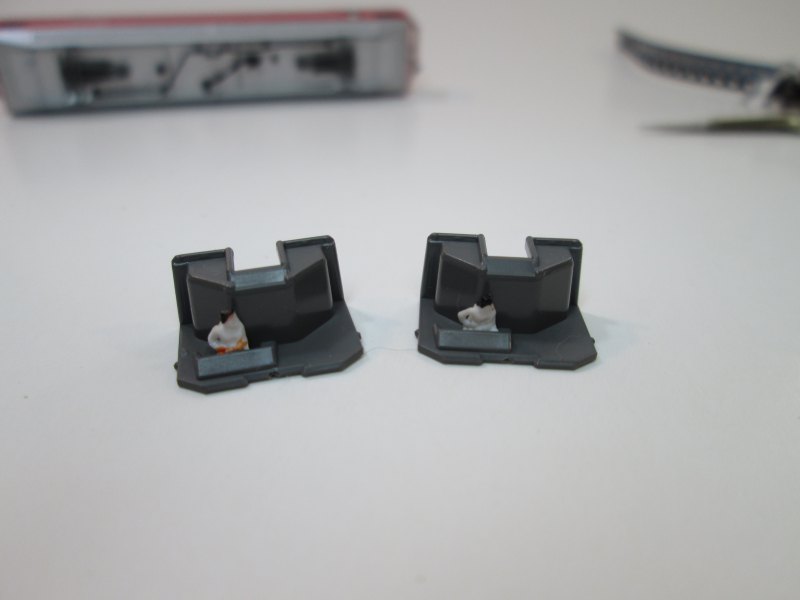 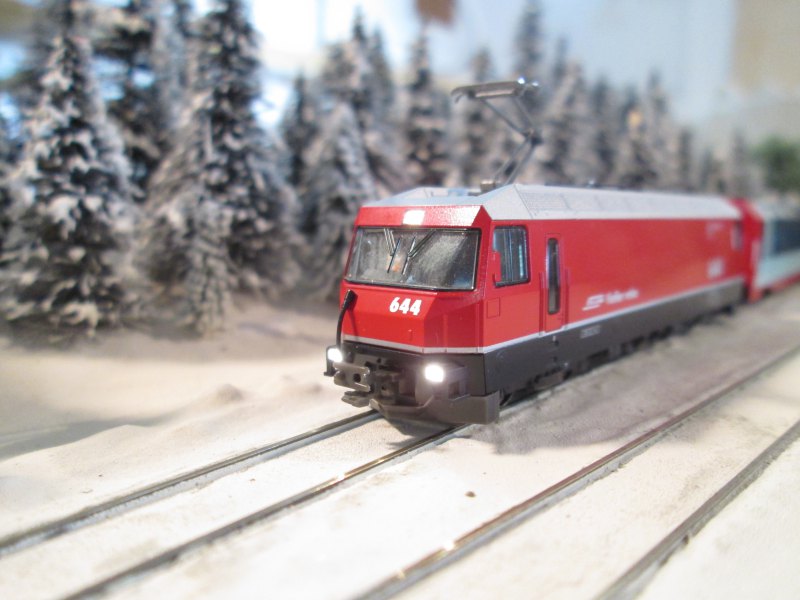 DCC for the Kato TGV
Upgrading the Kato Glacier Express