Keepalive for the Kato TGV

My Kato "sud est" TGV runs well considering its age, however since then N scale mechanisms have come on a bit, and the orange TGV is lacking in a few areas. Chief would be the lack of flywheels, causing very abrupt stops when the wheels loose contact with the rails. Since two of the eight wheels have traction tires, it doesn't take a whole lot of movement to cause this to happen.

So I decided to have a go at fixing this today. I decided that a small keep-alive circuit might do the trick. The theory is that by adding some capacitors to decoder, they provide a small amount of storage capacity, capable of powering the decoder for a fraction of a second until the engine moves a little further and regains power.

That's the theory. In my parts drawer I have a bunch of capacitors, so I pulled out a bunch and measured them up. The TGV motor car doesn't have a whole lot of free space, so most of my capacitors wouldn't fit. In the end only some 10V tantalums were small enough. Since DCC is about 20V, I would need to double up each capacitor so as not to exceed their maximum voltage. Unfortunately that also halves their capacity. 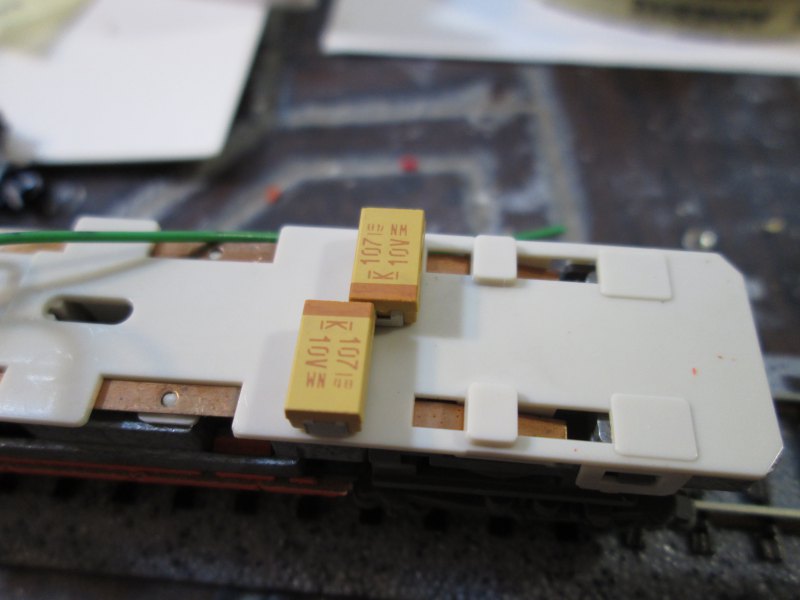 To wire them up to my decoder I needed to find the + and - rails. That wasn't too hard, and some quick probing with the multimeter around the diode bridge soon confirmed my guess. 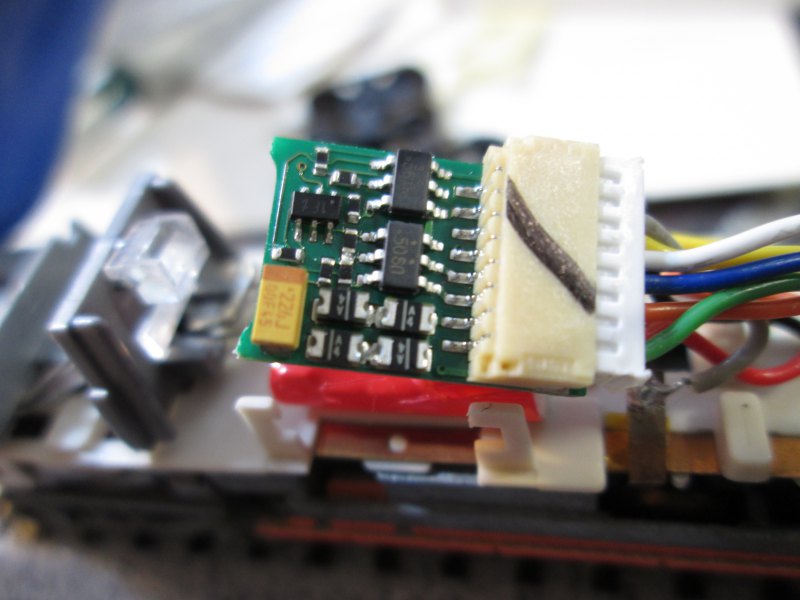 The small yellow capacitor is smoothing the VCC rail for the micro controller; this is quite a clever design as only the micro controller is powered from here, so when the decoder loses power momentarily, all the outputs (motors, lights, etc) lose power, however the micro remains powered. Then when power returns, it can instantly pick up where it left off, as program execution was never interrupted.

I made up a quick PCB and soldered the capacitors into place: 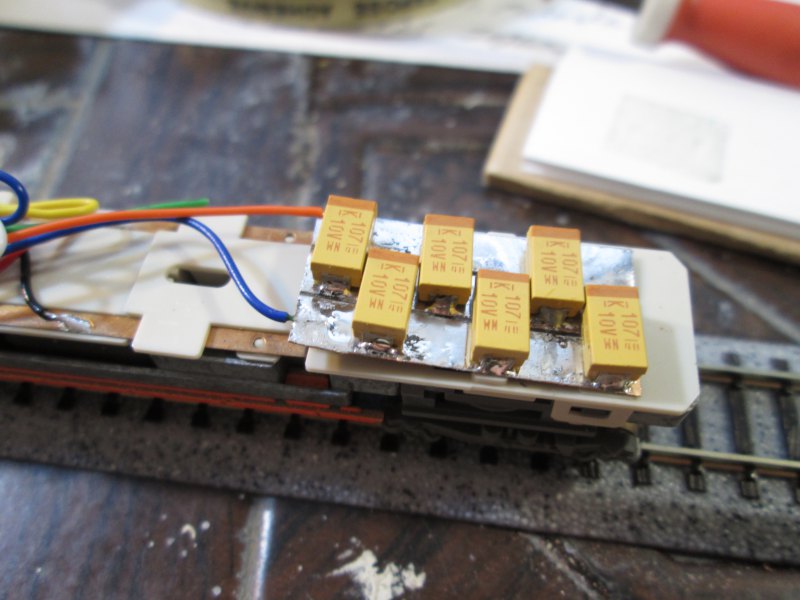 The orange and blue wires connect to the + and - terminals of the diode bridge.

I placed the loco on the rails, turned on the headlight, and then lifted it off. The headlight faded out over the course of a second. I then put the motor on speed step 1 and repeated the process: this time the keep-alive effect was not noticeable and appeared to have no positive benefit.

I think the reason for the failure is that my capacitors are only proving 150μF (100μF in parallel with 100μF, times 3) of storage, which is a very small amount, and not enough for a hungry motor. To truly provide a useful amount of "electrical flywheeling", I would need a lot more capacitance. Commercial products use super capacitors, so I may yet explore this option (super caps are expensive though).

Never mind, I like to think it made a very small improvement to the running of my TGV!