Around the end of the  Ranuska peninsula, the track passes under a mountain and skirts quite close to the coastline. When the engineers were building the track, they had to dig through a lot of loose rock, and had problems with the hillside above. Since the tunnel was so close to the surface, the engineers built up a brick and concrete lining where the tunnel broke through. The resulting tunnel has become something of an icon for the area.

So here is the area where my tunnel will go, with the sanatorium perched above. It is so close to the edge that a tunnel would just look silly, but I want a tunnel. While surfing for ideas I came across the Cinque Terre in Italy, which is a rugged patch of coast line along the Italian Riviera. I found some great looking stone structures that were half tunnel, half rock shelters, so I decided to copy that. 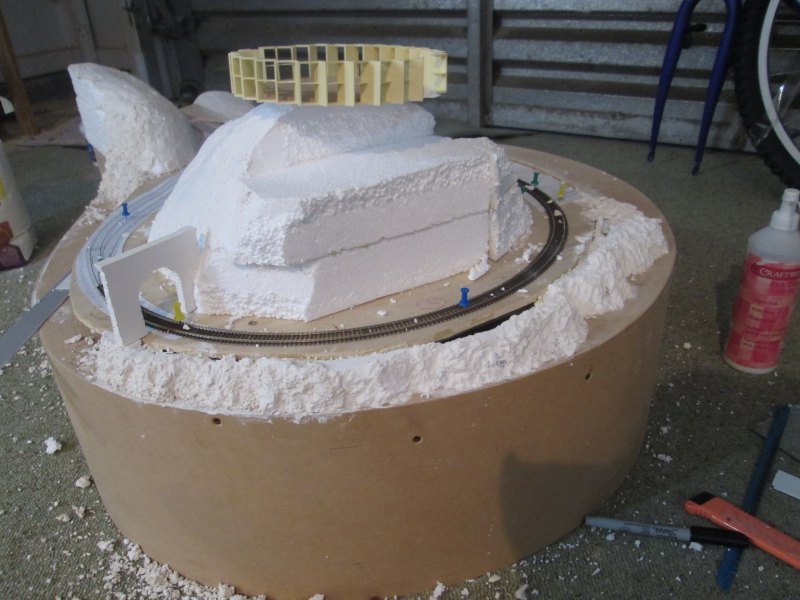 I started by cutting a length of MDF, cutting out some arches, and covering it in DAS. A few hours later I scribed in the horizontal courses, then the next day I attacked it with my Dremel and a 0.1mm engraving bit. Slowly, over several days, I carved in all the vertical gaps between bricks, then carved in the curved stones over the arches. 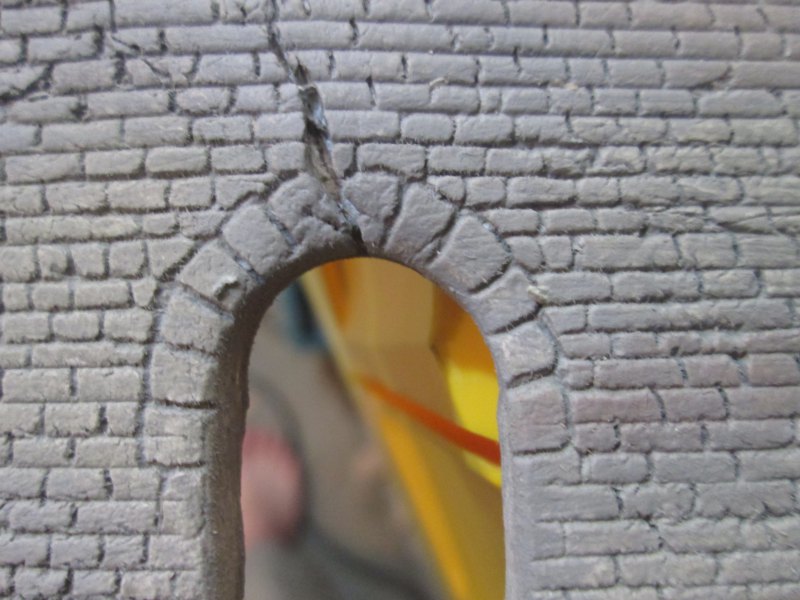 Once done I gave it a quick wash of stone grey. 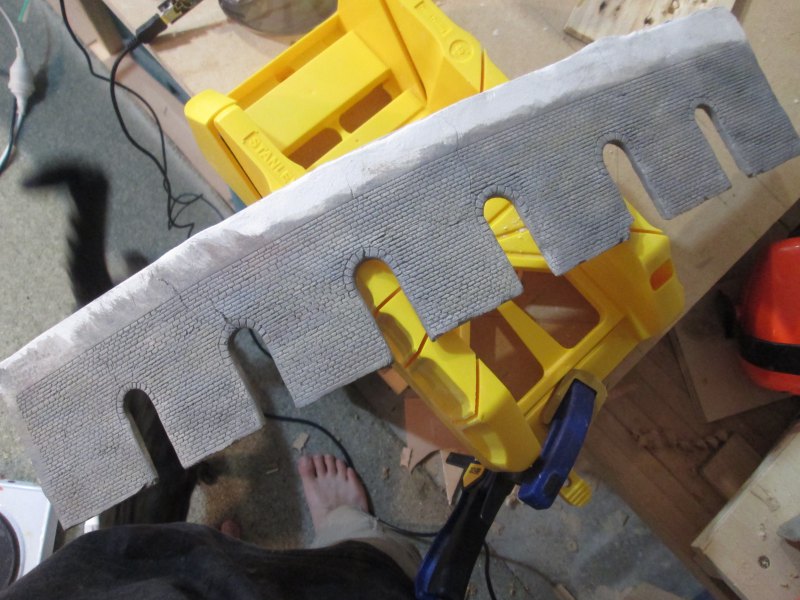 The DAS cracked a bit with the curving, however I'm not too worried, I think it adds to the character of a run down railway.

Between the trackbed and the rocks I carved out a trench and did a test fit. It looks a bit silly in this view, and I will cut down the excessive height when I blend it into the scenery. 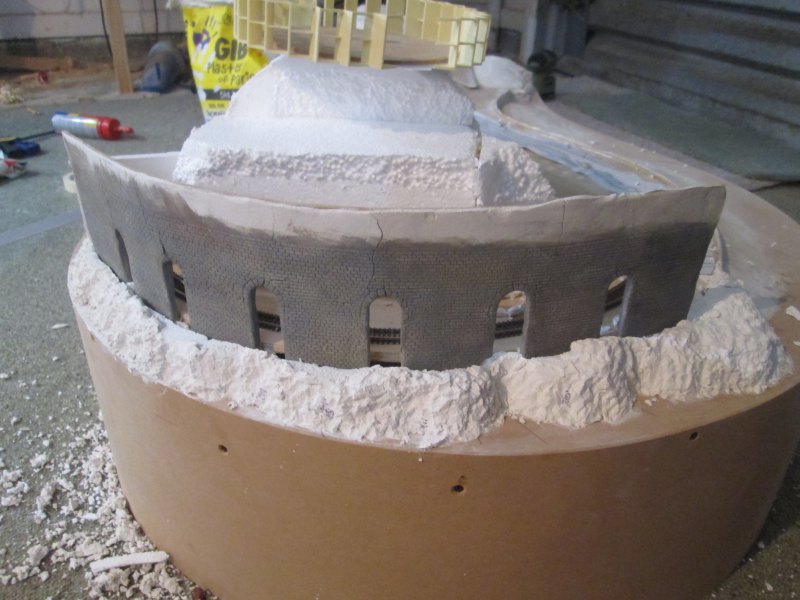 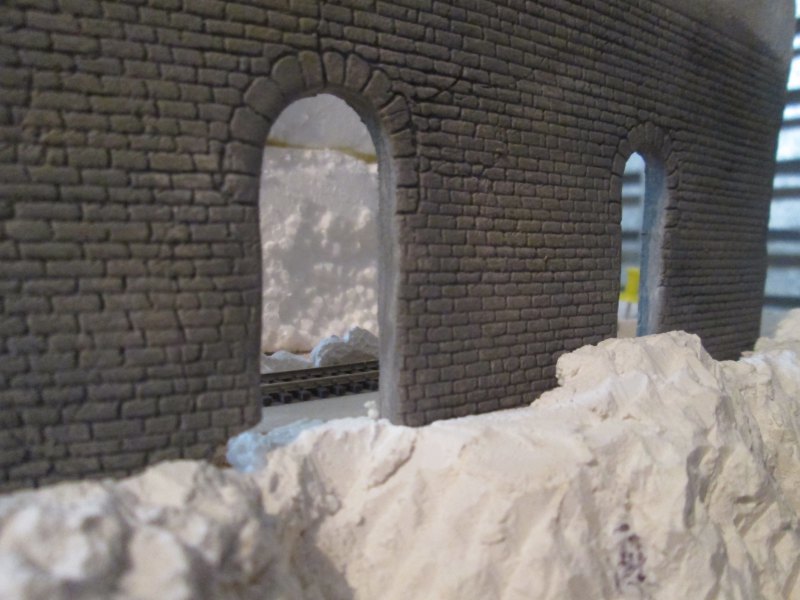 Once in position I will build the sea shore rocks up around the brickwork and blend the two together, then cover things in bush, ivy, moss, dust, rocks, palm trees, etc.

On my test square I did some tests with the colouring of the rocks. I can never decide whether rocks should be light with dark gaps between them, or the opposite way around. Looking at pictures of the Cinque Terre I found evidence of both! I decided to try medium rocks with light mortar. To start with I painted the whole piece a dark shade of watery grey. Once dry I mixed up some very watery plaster and brushed it over the top. The plaster settled in all the cracks and I wiped off any surface plaster-water with my finger. A bit of dry brushing and a few more gentle coats of mostly-water-plaster later and I had this: 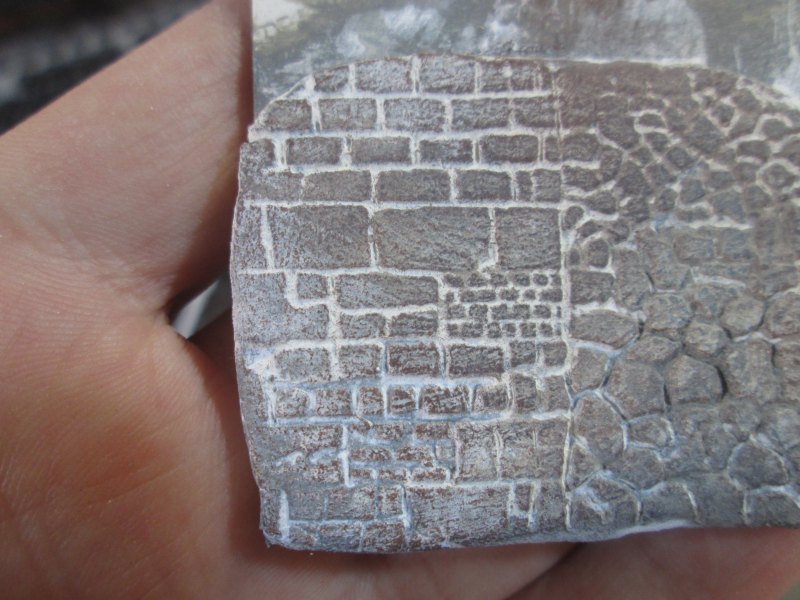 I'm very happy with that look, and the texture of the DAS is incredible! It seems I just can't go wrong with this material, even when I sand it with 80 grit paper and it just adds more texture.

In other news, my track order has finally arrived! Completely unexpected, zero communication from the seller that it was actually shipping. At least now I have a good sized stock pile.