"but that can wait for the next rainy spell" I said...

Well the next rainy spell arrived pretty promptly, so with little delay I settled down and made a back yard garden for the little E.L. Moore cottage.

When I off handedly mentioned building a vege garden, the matriarch very quickly handed down her specifications: two raised gardens, on the sunny side of the house, at least 1 foot off the ground. No wide than arm's length, with good walking space between them. While you're at it, I'd also like a glass house.

Well! Not one to argue I rummaged around under the house and found some suitable ship-lap styrene siding that had seen better days. A bit of cutting and sanding later and I had the framing made up. I filled up the boxes with some of my usual dirt mix (glue-plaster-paint) and then mixed in some horse & sheep manure from over the fence.

A bumper crop of cabbages were soon well on their way, along with some stalks of garlic and the usual lettuces and so forth. The cabbages are mustard seeds painted green; an I idea I stumbled upon while reading about HO scale cabbages from Mr 30 Squares. 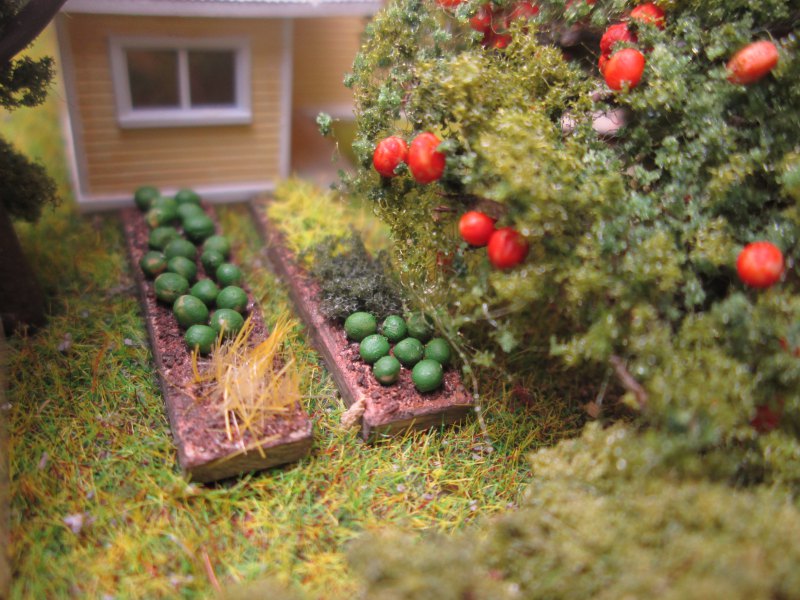 The observant amongst you will notice that there is also a large tree in the scene... this is another wire armature tree, though a little shorter and more apple-tree shaped this time. I put on a very thin layer of poly-fibre and some nice apple-green leaves, all washed down with a liberal dosage of extreme hold hair spray.

As for the apples... well these are just cabbages painted fire-red, and stuck on with more liberal doses of hair spray. I use more of that stuff in one sitting than Rachel has in her entire life! One could argue about the merits of 3/4 foot apples; perhaps it is that excellent manure that makes the fruit so plump? 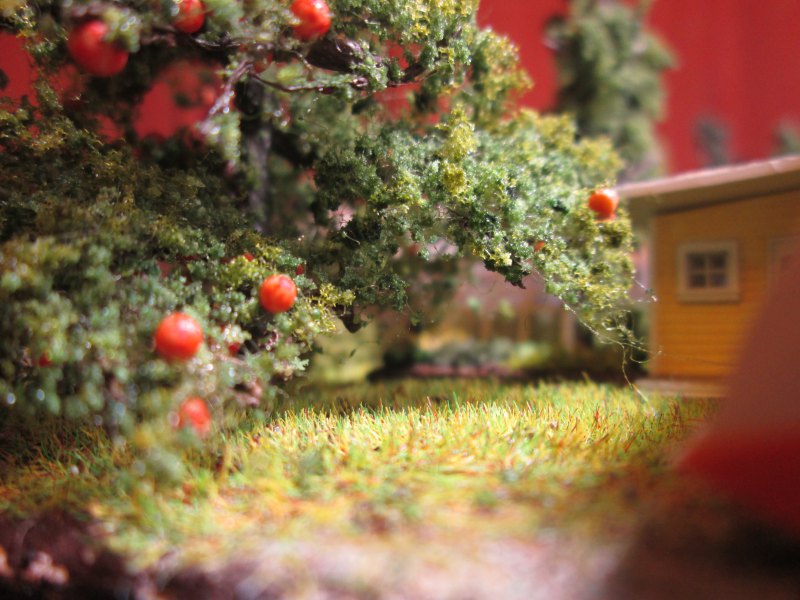 As I quickly discovered, do a Google image search for "glass house" and you'll end up with a lot of very modern, very square architecture. That certainly was NOT what the matriarch had in mind! A little more hunting and some scribbles on a pad of paper and I had a rough plan: 20mm long, 15mm wide, walls 10mm high, and a peak at 17.5mm. I had a nice sheet of clear styrene, so I drew the plan out on that, scoring and folding gently to make the corners.

I taped the whole thing up with some masking tape and cut off little beads of 0.75mm square styrene strip to make up the corner bracing. Some 0.5 x 0.5mm styrene strip made the inner dividers. As usual, Microscale Micro-weld did a fantastic job of gluing together the styrene, and all with just a gentle citrus fragrance. A nice change from the MEK I formerly used! 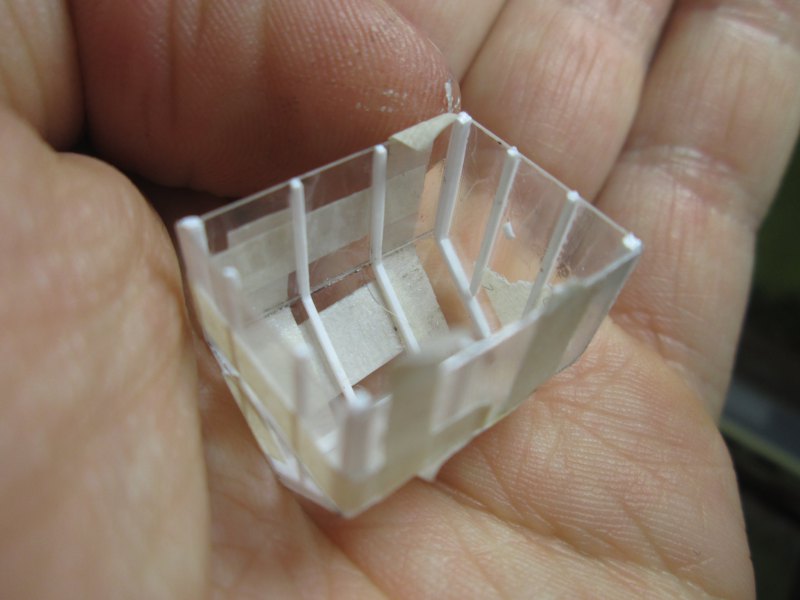 What use is a glass house without any plants though? The planter boxes were easily made up from some styrene strip, but how could I support the plants? A little head scratching and I came up with the answer: 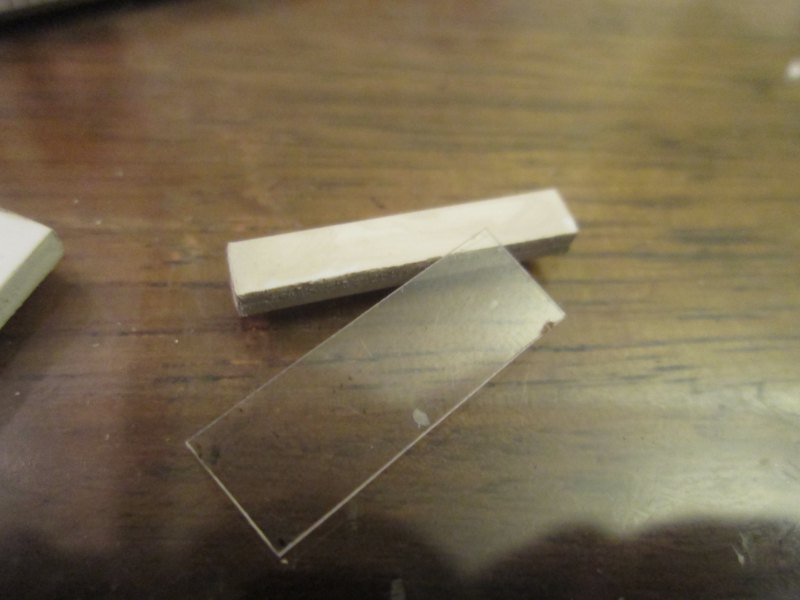 Take one clear piece of plastic, smother it in super glue, and then cut thin strips of Woodland Scenics foliage material. Stick these up and over and back down the other side. Alternate colours for more variety. Once done, trim any foliage flush off across the bottom and then bed it into a thick bead of Humbrol Clearfix. 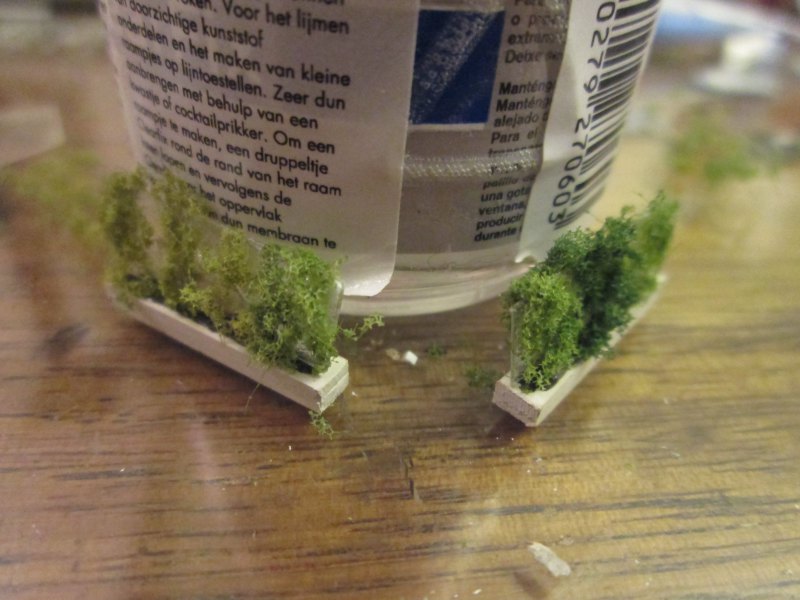 Bingo! Some careful gluing later and I had my finished glasshouse, complete with crops: 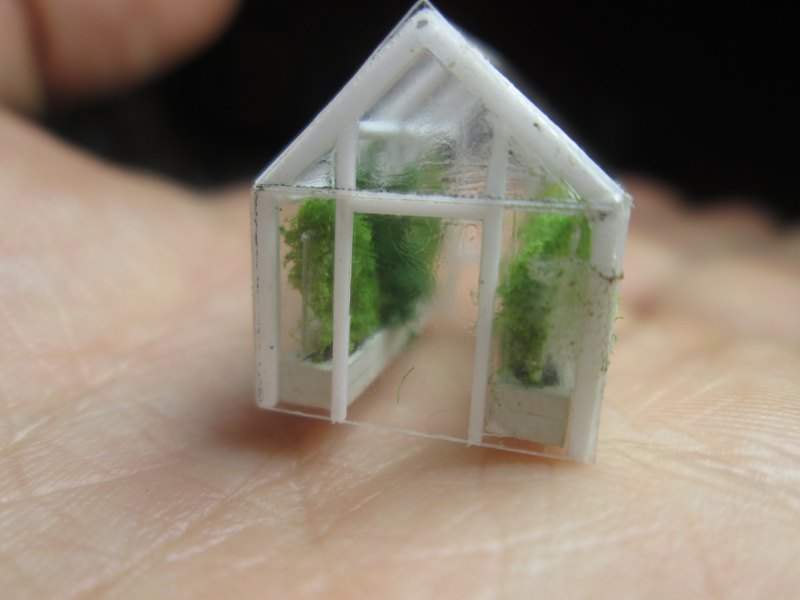 A couple of minutes later and the scene was complete: 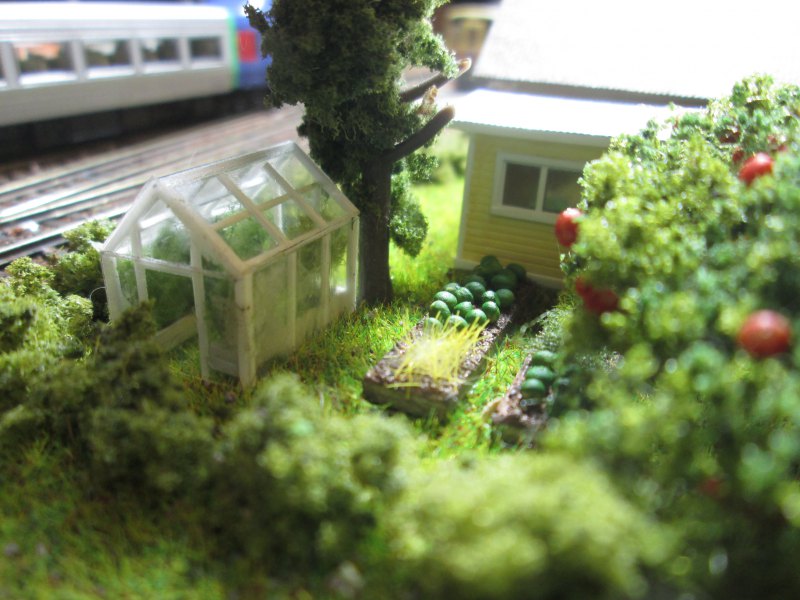 Now, isn't that a cast improvement! Of course now the rest of the property looks utterly bare... She Who Must Be Obeyed has mentioned something about a white picket fence out front...